Netanyahu’s rivals race to finalise bid to unseat him

Netanyahu’s rivals race to finalise bid to unseat him


Israel’s opposition leaders are locked in frantic final-hour negotiations to nail down a minority government that could potentially end prime minister Benjamin Netanyahu’s 12-year reign as premier of the Jewish state.

The unlikely coalition, which straddles the political spectrum — from the far-left Meretz party, to the ultranationalist Yamina, anchored by centrists Yesh Atid — has already amassed 57 seats in the 120-seat Knesset. It also needs the support of Islamist party Ra’am, who have four seats, to cross the 61-seat threshold and form a government.

The self-styled “change government” has until Wednesday to convince President Reuven Rivlin they can win a vote in parliament and replace Israel’s longest-serving prime minister.

Taking Netanyahu’s place could be Naftali Bennett, a former defence minister, whose party has only six seats after the departure of one member who would not back the coalition. Bennett might serve in a rotating premiership with Yesh Atid leader Yair Lapid, an ex-television presenter, who corralled the coalition together over weeks of back-room negotiations.

Bennett, 49, who was once Netanyahu’s chief of staff, spent Sunday night with Lapid allocating potential cabinet portfolios, while rightwing protesters gathered around his and other Yamina leaders’ homes.

Ayelet Shaked, Bennett’s political partner and possible justice minister, received extra police protection after threats against her from the right, which Netanyahu has spurred into street protests by branding Yamina as traitors to the Zionist cause.

The constant threat of violence against Netanyahu’s rivals was a primary reason for removing him as prime minister, Lapid said on Tuesday. He added that he, Bennett, Shaked, the attorney-general and prosecutors trying Netanyahu for corruption, as well as several journalists, were among those living under police protection.

“We have all been threatened with violence and murder,” Lapid said at an opposition meeting, where he acknowledged the coalition was facing “plenty of obstacles”. If successful, Lapid continued, then “it will be quieter, ministers will go to work without inciting [hatred], without lying, without trying to instil fear all the time”.

Netanyahu called the opposition alliance “the fraud of the century” and said it would make Israel weaker.

“What will [this government] do for Israel’s deterrence? How will we look in the eyes of our enemies,” he said on Sunday night. “What will they do in Iran and in Gaza? What will they say in the halls of government in Washington?”

Bennett is ideologically opposed to the creation of a Palestinian state and previously clashed with Netanyahu for not coming down harder on Hamas, the militant group that controls the Gaza Strip.

He has lobbied for Israel to annex wide swaths of the occupied West Bank and championed expanding Jewish settlements, considered illegal by most of the international community.

Bennett vowed to remain to the right of Likud, Netanyahu’s party, in a speech on Sunday night. “This is not a government that will give away parts of the Land of Israel,” he said, using a biblical reference to areas that Israel controls but Palestinians seek for a homeland.

Netanyahu, meanwhile, has stepped up efforts to peel away a single member of the coalition, which would govern with a one-seat majority if the Islamist party remained on board.

“There are loyal Israelis even in this leftwing opposition government that Lapid is creating,” said one person briefed on overnight calls from Netanyahu’s team to his opposition. “They are being made aware of the dangers to Israel [that this government poses].” 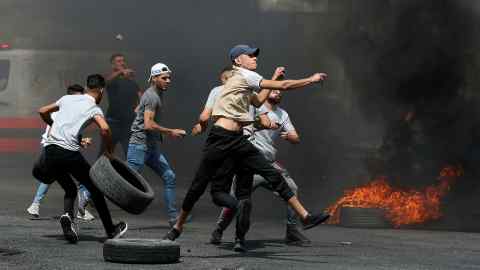 Netanyahu’s attacks on Bennett’s rightwing credentials have placed pressure on Mansour Abbas, Ra’am’s leader, to reconsider his stated policy of supporting a Zionist government in exchange for material benefits for Israel’s Muslim minority community, including more money for police, a hospital and other civic amenities.

Abbas broke from Israel’s other Arab parties in an attempt to position himself as a kingmaker after four gridlocked elections since April 2019. While both Bennett and Netanyahu have publicly boasted of rightwing policies that sideline the Palestinian citizens of Israel, Abbas has kept silent.

“He needs to think twice about what he is about to do,” said a member of parliament from a rival Arab bloc of parties, who want no part of the coalition. “You replace Netanyahu with Bennett, and you think that is good?”

If Bennett and Lapid succeed in establishing a coalition, the Knesset will probably vote by the middle of next week to seat a government. Should they fail, Israel is facing its fifth election in just over two years.

One of Wall Street’s hottest hedge funds has pulled in a quarter of a billion dollars from a small group of investors seeking...

Why economists and activists are disappointed over pledges

Eurowings to establish new base in Prague | News

Hey, another country is forcing an international sporting event down its citizens’ throats