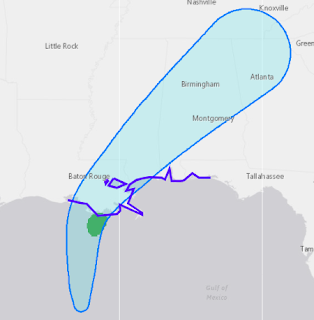 The cone does not show the story with this storm.

Using the Interactive one.

It shows the strongest winds in green

Note how far North that is from the origin of this cone. 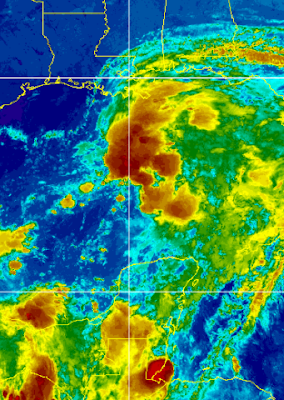 I’m going to be very honest and say that this is basically a “Tropical Disturbance” in that it came from the tropics and it’s creating a “disturbance” in the force … carrying with it a a lot of unsettled, disturbed weather that can include heavy rainfall and flooding both along the coast and FAR INLAND. As the topography rises in that part of the world (hilly terrain) and when you add hills to the mix the water runs down the hills and settles in the many low lying areas such as bays and bayous. It’s going to be a mess, add in the clash of 92L aka PTC3 aka probably Claudette with the front will amp up the probability for fast moving, violent weather but this is not your typical Tropical Storm.  The bad weather is there NOW or just offshore in a few cells and other parts of it are displaced far to the East amping up weather issues all the way to Florida. Not one mass of Tropical Storm force winds traveling en mass about to make landfall at a specific time.

Satellite imagery shows that the “weather” is far from the “center” but there is no real, hard core center and the lowest pressures hang back in the Southern part of the large, broad center yet the “weather” is about to roll onto land.

Why are we doing this exercise in futility like some dress rehearsal for what will come later? The way the NHC has covered tropical weather has evolved some from Neil Frank, Bob Sheets and May Mayfield and it’s working as a division of sorts with the National Weather Service that does a Kick Ass job but is largely ignored by the media. To quote a common saying “it is what it is” and the NHC is issuing advisories for a potential cyclone and in theory that is good as often systems like this CAN spin up tight and become a Hurricane fast just offshore……….I said “systems like this” not THIS ONE. It is what it is. I’ll show the cone below but first look at this image showing where the center is (elongated) and where the lower pressures are and you will see the problem. 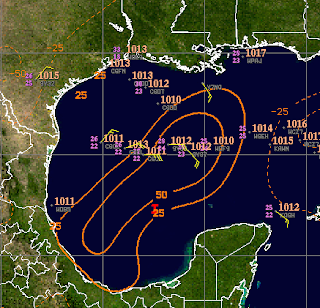 Well relatively as this is not really LOW pressure. 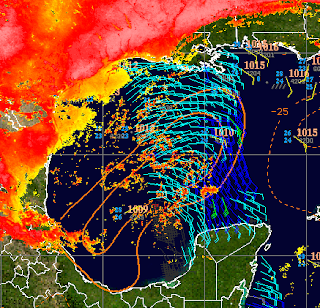 Red is dry air. High dry to the North and West

and SAL entering from the East.

ASCAT shows a semblance of a low down low.

Weather is to the North.

And it’s going to deliver that. 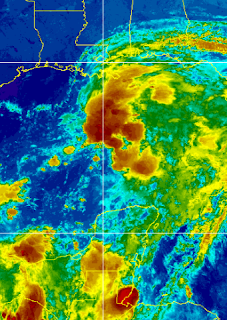 Note the weather is far displaced to the North.

There is little weather where the NHC has the center. 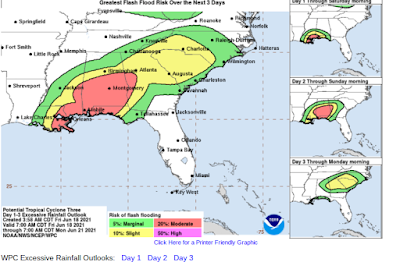 Great graphic the NHC now includes that is very National Weather Service based in that it shows “weather” broadly associated with the system that could produce FLASH FLOODING. For a FAST MOVING system that is moving in odd ways and reforming or transferring energy back and forth (that happens in not well organized storms) flooding is usually the bigger problem than winds unless a small tornado blows up somewhere in the general area.

Keep your weather announcements on your phone in the ON mode and check frequently to see if severe weather complete with flooding can occur in your area and I mean ATLANTA and up in the Applachian region where the lay of the land is prone to wiping out one particular area that you may be living in or visiting for a week because you rented a cabin far from the tropics and suddenly your vacation is turning ugly.

I’ll update later today. I have a funeral later today for a friend I may be attending and some things to take care of… just life and in general this is not Yo Mommas Tropical Storm if you know what I mean but it’s 2021 so it will most likely get the name Claudette and be relocated probably to where it’s real weather is.. 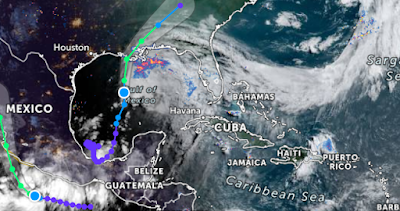 Basically this is the case of a Tropical Disturbance merging with a trough/front and it’s just a mess of weather. Watch out for the weather but do not let the hype blow you away.

This area of severe weather is far from the “center”

But the NHC plans on “relocating the center” soon.

You can read the discussion at the NHC site.

‘We have to pay the price’: Oslo’s plan to turn oil wealth into climate leadership | Climate change