October is like the 8th Inning… You Think It’s All Over……..But Not Yet. Late October Brings a Surprise BOO! Often After a Quiet Period. Did the Volcano Dim the Hurricane Season at Prime Time? Maybe… Research Will Tell… But SAL Out there in October. (SAL Like Choking Volcanic Dust)

October is like the 8th Inning… You Think It’s All Over……..But Not Yet. Late October Brings a Surprise BOO! Often After a Quiet Period. Did the Volcano Dim the Hurricane Season at Prime Time? Maybe… Research Will Tell… But SAL Out there in October. (SAL Like Choking Volcanic Dust) 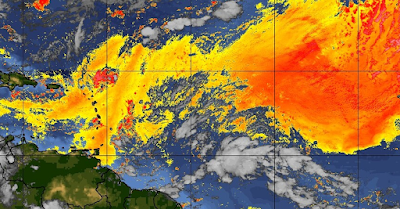 You’re right, rarely do I show this graphic in October, and originally decided to show it as the hole in the golden, orange fall colors is a tropical wave trying to survive in a dusty ocean that should not be dusty in October. It’s a wave worth watching in my opinion as well as the SW Caribbean Watch shown below. 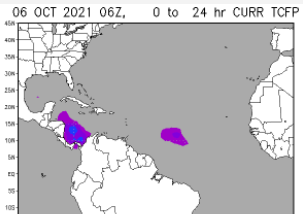 There’s the wave in purple.

But it’s being chocked off to be honest….

…because of the untimely SAL

…but using the SAL phrase still the same)

And oh look the SW Caribbean.

That purple blob permanently anchored there in October. 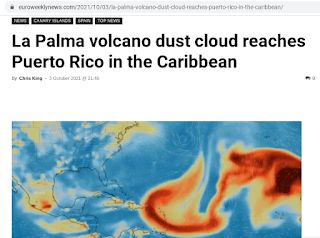 So let’s talk on weather and other weirdness and how they may or may not interconnect. Though in reality everything makes a difference. Yes, butterfly wings theory in the chaotic pattern of the universe. 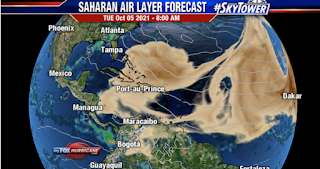 Link to put that into motion is shown below. Love these products on this incredible site.

So let’s think on this a bit. The volcano went crazy around September 19th, which is statistically peak of the season, and the season in the Atlantic went flat.  Yes, Sam developed but he was out ahead of the dust or the stronger part of the dust from the Volcano and moving slowly through the Western part of the Atlantic though safely out at sea to not bother anyone. But all in all everything went quiet as if someone dimmed the light switch. The lights were on but something was wrong, dimmer than usual. You had to go get your good reading glasses to find a wave worth talking about.

Most of what formed in September was weak.

Below is 2005 a possible analog year to this one.

Analog years picked out by various agencies are great to look at but don’t always pan out as weather happens in real time, like a baseball game. Or football… you know “on any given Sunday” any team can win.  Big gap in July but SAL was strong out in the Atlantic, after a speedy burst in June when waves came off of Africa looking like they should in August.  Upwelling and Sam and Larry busting through the once, strong and mighty High Pressure. 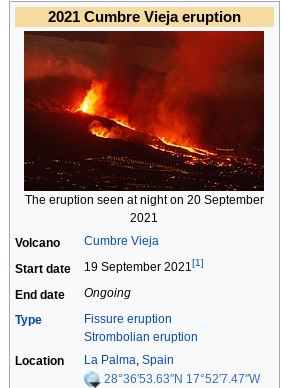 Something to think on….

Many hurricane experts had said we would be busy way into November.

Kelvin Wave and his friends.

Everyone has said October & November would be busy.

Other than slow moving Sam … October doesn’t look too busy.

Ending with what the graphic I usually begin with….

Some amped up rain at King Tide time.

Personally i do believe that October will have a nasty BOO! closer to Halloween Time. Where exactly I can’t say… but let’s look at the map put up by the expert and thanks to Thor because I noticed it on one of his awesome videos.  Brian McNoldy is seriously one of the best to follow on Twitter as he knows his stuff really well and is great and sharing and communicating his wealth of knowledge of meteorology! 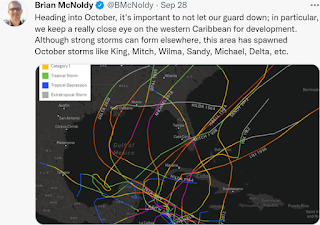 Usually they can pop up anywhere….

Close in to Florida or down in the Caribbean.

Or they form down in the Carib …..

Ps It may be the 8th Inning but it’s not over yet! Great game last night.. yes lifetime member of the Red Sox Nation …

It’s easy to blame Larry for the quiet few weeks in the Atlantic for numerous reasons and it’s friendly, fishy sibling Sam that did to the Western half of the Atlantic what Larry did to the Eastern Atlantic.

Snow top layer.Sleet middle of the winter cake.ICE Freezing Rain bottom layer.This could be an Ice Storm down near the coast.Wilmington, Myrtle Beach...

Climatology. How it Always Wins! Snow in Mid January in Raleigh……… Can Happen Anytime BUT…….Usually Mid to Late January. (Like Hurricane Season and Tropical...

So this was yesterday...... snowy.ICE after Sleet.This is today.After the Winter Storm.This doesn't always happen but it almost always happens in Raleigh. This...