Economists are cutting their growth forecasts for the eurozone economy as rising Covid-19 infections and vaccination delays lead to tighter restrictions in several countries including France, Italy and Germany.

The reintroduction of lockdown measures across Europe is fuelling concerns that the region could suffer another disappointing summer tourism season if vaccinations do not speed up enough to allow travel restrictions to be eased.

France imposed a new four-week lockdown in Paris and several other regions on Friday night after coronavirus infection levels rose to their highest level since November. Italy has announced a fresh lockdown over Easter, while some German cities have been forced to roll back restrictions that had only recently been lifted due to a sharp rise in infections.

This has prompted private sector economists, including those at Goldman Sachs, Barclays, ING and Berenberg, to cut their forecasts for eurozone growth — in contrast to the brightening outlook for the US and much of the global economy.

“Up to now, we had built our eurozone forecasts on the assumptions of gradual easing of the lockdown measures in March,” said Carsten Brzeski, head of macro research at ING. “Well, we can forget about this.” He said ING now expected the eurozone economy to shrink 1.5 per cent in the first quarter, having previously forecast a 0.8 per cent decline.

Holger Schmieding, chief economist at Berenberg, said each month in lockdown would shave 0.3 percentage points off eurozone growth. He has cut his growth forecast for this year from 4.4 to 4.1 per cent, assuming a one-month delay to reopening.

On Monday, German chancellor Angela Merkel will meet regional leaders to discuss whether to tighten restrictions after the country’s seven-day infection rate per 100,000 people rose to 103.9 on Sunday. If the rate stays above 100 for three consecutive days in a region, an “emergency brake” requires a return to lockdown.

The cities of Hamburg and Cologne have already tightened restrictions. Berlin is considering requiring all travellers from abroad to have been tested for coronavirus before leaving and to go into quarantine on arrival, according to a draft resolution reported by Bild newspaper. 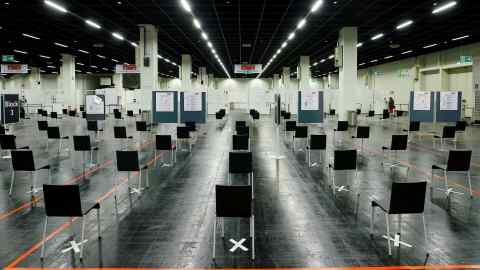 “Of course, risks remain tilted to the downside,” said Nadia Gharbi, economist at Pictet Wealth Management. “A lot will depend on the EU’s capacity to speed up vaccinations in April and May.”

Only about 12 people per 100 in the EU have received a first dose of a Covid-19 vaccine, compared to 37 in the US and 43 in the UK, according the FT’s vaccine tracker. Progress on European vaccinations has been hampered by supply problems and last week several countries temporarily suspended use of the Oxford/AstraZeneca vaccine.

European Commission president Ursula von der Leyen said last week the supply of vaccines would increase in the second quarter, assuring it was on track to vaccinate 70 per cent of adults “by the end of the summer”.

Morgan Stanley economists warned last week that if restrictions continued for several more months, it would cause “another lost summer” and knock 2 to 3 per cent off Spanish and Italian gross domestic product.

Barclays economists said they now expected European mobility restrictions to only be lifted toward the end of the second quarter, “which will weaken domestic demand, and consequently imports”. They kept their growth forecast for this year at 3.9 per cent, but cut next year’s from 5.3 to 4.3 per cent.

Although many economists are downbeat about the short-term outlook for the eurozone, most are convinced it will rebound strongly once enough people are vaccinated to lift most restrictions later this year. Others point out that the rebound of global trade will boost export-focused manufacturers in Germany.

Erik Nielsen, chief economist at UniCredit, said the eurozone would be boosted by a positive spillover from a $1.9tn stimulus package in the US. “The impulse from the US will be positive — and more so than the negative of the lockdown,” he said.

Here4dBesthttp://here4dbest.com
Previous articleXLB – Materials Dashboard For March
Next articleCognac vs Whiskey: What Are the Differences

The president of the European Council has said the Biden administration’s calls for vaccine patent waivers will not be a “magic bullet” for...

Pope Francis wearing a face mask attends an inter-religious prayer service for peace along with other religious representatives in the Basilica of Santa...