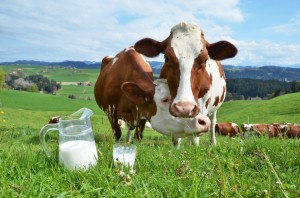 However, as many people with IBD or IBS have experienced, ingesting prebiotics often just leads to more gas and bloating!

Interestingly, this recent study on adding prebiotics to the fermentation process of milk (creates yoghurt) and infant formula (which already contains prebiotics) shows that in the infant formula containing prebiotics “The microorganisms were not able to increase the CLA content of the fermented products ” and “The highest CLA content was observed in fermented milk containing only Str. thermophilus and Lb. bulgaricus”.

So the only increase in conjugated linoleic acid (CLA) was  obtained by using ONLY probiotics (and no prebiotics).

Important to note is that the probiotic species used in this this study are the exact same ones in Natren’s Yogurt Starter. Here’s how to make yoghurt using this probiotic starter in any type of milk (almond, coconut, cow, goat, etc.).

Getting back to the research… In another interesting study, researchers tested adding prebiotics to 5 different probiotic species. This is an interesting study to me, because they classed not only oligofructose as a prebiotic, but also polydextrose and maltodextrin as well! Now those of you who have used Absorb Plus, or been on The IBD Remission Diet, know that Absorb Plus elemental shakes contain tapioca maltodextrin as the carbohydrate source.

Interestingly, although the other prebiotics did increase bacterial count at varying levels,  “the highest amounts of conjugated linoleic acid (38% higher than in the control) were found in milk fermented by S. thermophilus-L. acidophilus co-culture and supplemented with maltodextrin.”

Now why am I so excited about conjugated linoleic acid (CLA)?

CLA is a fatty acid that is produced as a result of fermentation in the guts of pastured ruminants, like cows, goats and sheep. Research has shown CLA to be a potent healing agent in conditions ranging from allergies and inflammation, to cancer, to osteoporosis.

So you can obtain CLA from the meat and dairy products of pasture-fed cows, goats and sheep. Or, as these studies show, you can take the milk from pasture-fed ruminants and make your own yoghurt, and get even more CLA!

And perhaps, when you are on an elemental diet, or using Absorb Plus in conjunction with probiotics – you are also benefiting from increased CLA!