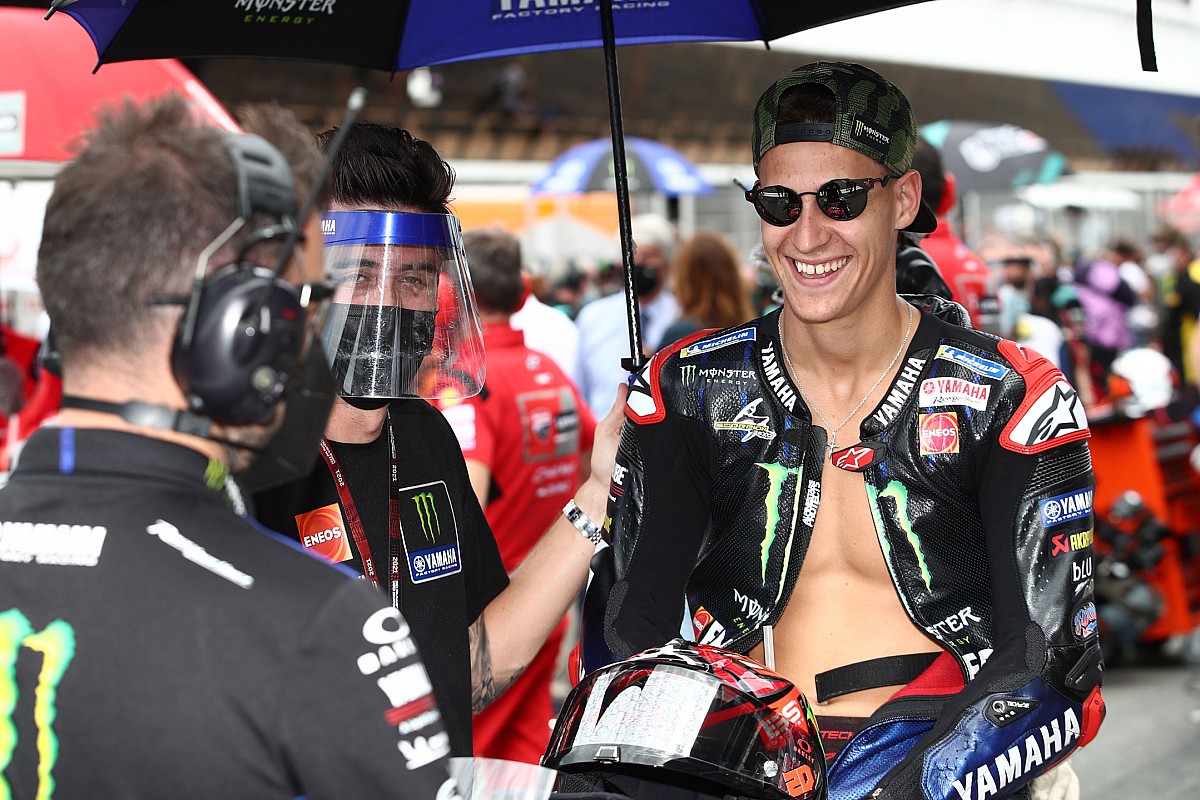 In the latter stages of Sunday’s 24-lap Barcelona race, Quartararo’s Yamaha leathers split open with around five tours to go and he was seen discarding his chest protector at Turn 3 while trailing eventual winner Miguel Oliveira.

Quartararo continued to the chequered flag with his suit fully open, but was not initially penalised despite the regulations surrounding safety equipment stating: “The equipment must be worn, correctly fastened, at all times during on-track activity.”

However, following further investigation by MotoGP’s Stewards Panel on Sunday evening, Quartararo was deemed to have contravened the regulations surrounding safety equipment.

As a result, the Yamaha rider has been hit with a three-second penalty, which drops him from fourth in the race classification to sixth, promoting Joan Mir to fourth and Yamaha teammate Maverick Vinales to fifth.

A statement issued by the FIM read: “On 6 June 2021 during the MotoGP race of the Gran Premi Monster Energy de Catalunya, you [Quartararo] were observed to be riding with your leather suit not correctly fastened and without the required chest protector.

“This is an infringement of Article 2.4.5.2 of the FIM World Championship Grand Prix Regulations.

“For the above reasons, the FIM MotoGP Stewards Panel has imposed a three-second penalty to be applied to the race results of the Gran Premi Monster Energy de Catalunya MotoGP race.”

Quartararo had already been given a three-second penalty for a track limits violation in the latter stages at Turns 1 and 2, when a mistake sent him through the run-off area and he was deemed not to have dropped a second in lap time to the rider behind.

This dropped Quartararo from third at the chequered flag to fourth.

Quartararo had no explanation for why his leathers came undone and said Alpinestars was looking into the issue.

A number of riders felt Quartararo should have been black-flagged during the race for the infringement, while Suzuki’s Mir said the Yamaha man had endangered other riders when he discarded his chest protector.

In response to these comments and the calls for a penalty, Quartararo took to Instagram to vent his frustrations.

“Congratulations to all the people that go to complain for another penalty,” he wrote.

“I put nobody in danger, like a ride says, and it was already tough for me to ride.

“But great to see the real faces of some people. Just want to thank all the people that support me and help through difficult moments. See you in the next one.”

Quartararo’s latest penalty means his championship lead shrinks from 17 points to just seven over Pramac’s Johann Zarco, who was second on Sunday at Barcelona.

Despite not featuring inside the top two in any of the practice sessions in the run up to qualifying, Rea managed to...

The ex-Honda junior shining at Toyota

As previously documented, this year’s SUPER GT season opener was a curious affair, as the top two cars from last year’s championship...

Macron warns Johnson to keep his word on Northern Ireland

The 40 Biggest Strong Dividends: These 3 Are Worth Considering