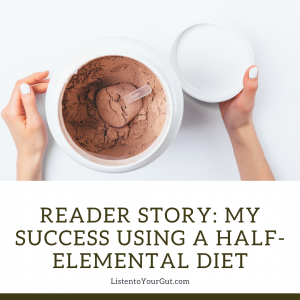 This is a FANTASTIC example of using a half-elemental diet to provide bowel rest and heal an abdominal abscess and fistula. Remember, not everyone needs to go on a full-elemental diet (or has time, or can afford it!).

1. For the “regular food” portion of a half-elemental diet, here are some very well tolerated shake recipes using gentle food ingredients you can find at your local grocery store or farmer’s market.

2. If you can eat some regular food, then sticking to this list of low-residue foods – tailored specifically for IBD – may help keep your gut happy. Along with probiotics and possibly wild oregano oil to combat intestinal infection.

3. Here are some well-tolerated protein shake recipes here which are better tolerated than normal food. People use these shakes when they’re ready to transition off an elemental diet, before they start eating regular food. So these shakes may be all you need.

4. Or you can use my Food Reintroduction Chart (given in Listen To Your Gut and The IBD Remission Diet) and try to stick to the foods listed in Phases 1 and 2. These foods have a history of being well tolerated, yet nutritious. If this is too difficult, then at the very least, stick to the Maintenance Diet guidelines (again, given in both books) and avoid these top allergen foods: dairy, wheat (gluten), corn, soy, sugar and refined carbs.

The reader below implemented a half-elemental diet, along with protocols from my IBD Remission Diet book:

I have had a great experience with Jini’s protocols! I haven’t had a chance to read all the way through the IBD Remission Diet book, but I have looked at certain parts that were most applicable to me.

I have had a pretty severe case of Crohn’s for about four years now. I was on Remicade for two of them until I developed antibodies to it and could no longer take it. I started to flare up again about six months ago and had terrible stomach pain, very little energy, and I lost about 20 pounds (15% of my body weight). I tried many different natural remedies (diets, naltrexone, probiotics, various supplements) and nothing I tried worked to put me in remission – so I had to go back to the GI. He recommended I try Entyvio, so I started on that and had 3 infusions over a couple of months with no change in symptoms. I was taking budesonide in the meantime to try to manage my pain.

I developed an abdominal abscess and fistula during this time, and I had to go to the hospital two different times to have a drain put in and get on antibiotics. I was told by several doctors I would need surgery to remove part of my terminal ileum that was severely inflamed. I was very discouraged, frustrated, and scared during this whole experience, and I wanted to avoid surgery at all costs.

During the second hospital stay, a nutritionist came to my room to discuss diet. He brought up the Listen To Your Gut protocol, so I started looking into it and decided to try to implement a partial elemental diet. I have been using Absorb Plus 1-2 times a day and have been using Jini’s guide for low fiber foods the rest of the time, and I have had GREAT results!
I have had very little stomach pain, I have gained about 10 pounds since I started, and I have been able to get off of all of the drugs I have been on (steroids, Entyvio, and antibiotics).

About a week after I got the second drain taken out, I could feel the abscess coming back for a third time, and I was sure I would end up back in the hospital yet again (which I did NOT want!). I desperately searched Jini’s book and website for information about abscesses and fistulas, and although there wasn’t a specific protocol for my exact problem (enterocutaneous abscess with intra-abdominal abscess) I was able to combine some of her ideas for anal abscesses and intestinal strictures and make a topical solution of DMSO, aloe vera, and wild oregano oil. I have been using it twice a day for three days now, along with taking several drops of the oregano oil orally, and I can already tell a huge difference — the area has softened significantly and the pain has almost disappeared. I am very hopeful that the abscess will be completely resolved within a couple more weeks.

I am so grateful for the information Jini has provided to help me avoid another trip to the hospital, and I would love to share my story and spread the word about LTYG if it can help others! I have already shared some samples of Absorb Plus with a friend who has Crohn’s, and I plan to post my story on various Crohns forums and Facebook pages! Thank you Jini!!

And thank YOU so much for sharing!!

If anyone else would like to share their story/feedback with me, please do! You will always remain anonymous – send me an email at [email protected]

If you experience an increase in symptoms or diarrhea with MucosaCalm, you may attribute your reaction to Licorice. However, you need to keep...

What Your Mental Health Says About Your Gut

BUT WAIT, there’s more! Quite literally, there are more neurotransmitters in your gut than in your brain – which is why the gut...

Juan Martin del Potro sees the come back to the court