Verstappen picked up his second pole of the 2021 season by edging out Lewis Hamilton for the top spot in qualifying at Paul Ricard on Saturday, ending Mercedes’ dominance in the sessions that mattered at the French GP since it returned to the F1 calendar in 2018.

He claimed his fifth F1 career pole by 0.258s and later explained that “from FP2 I think we made a good step forwards and basically that continued today”.

He added: “Of course, the conditions in FP3 were initially a little bit different [cooler and overcast], but then again it showed in qualifying that we had good pace.

“So, of course [I’m] very pleased with that. This has traditionally not been an amazing track for us, but to be able to put it on pole here of course we’re super happy about that.

“I knew it was going to be better than the last time we were here, but this good? I didn’t expect [that].

“So, that’s of course very promising for us and we just have to keep on going, keep on pushing to try and make it better.” 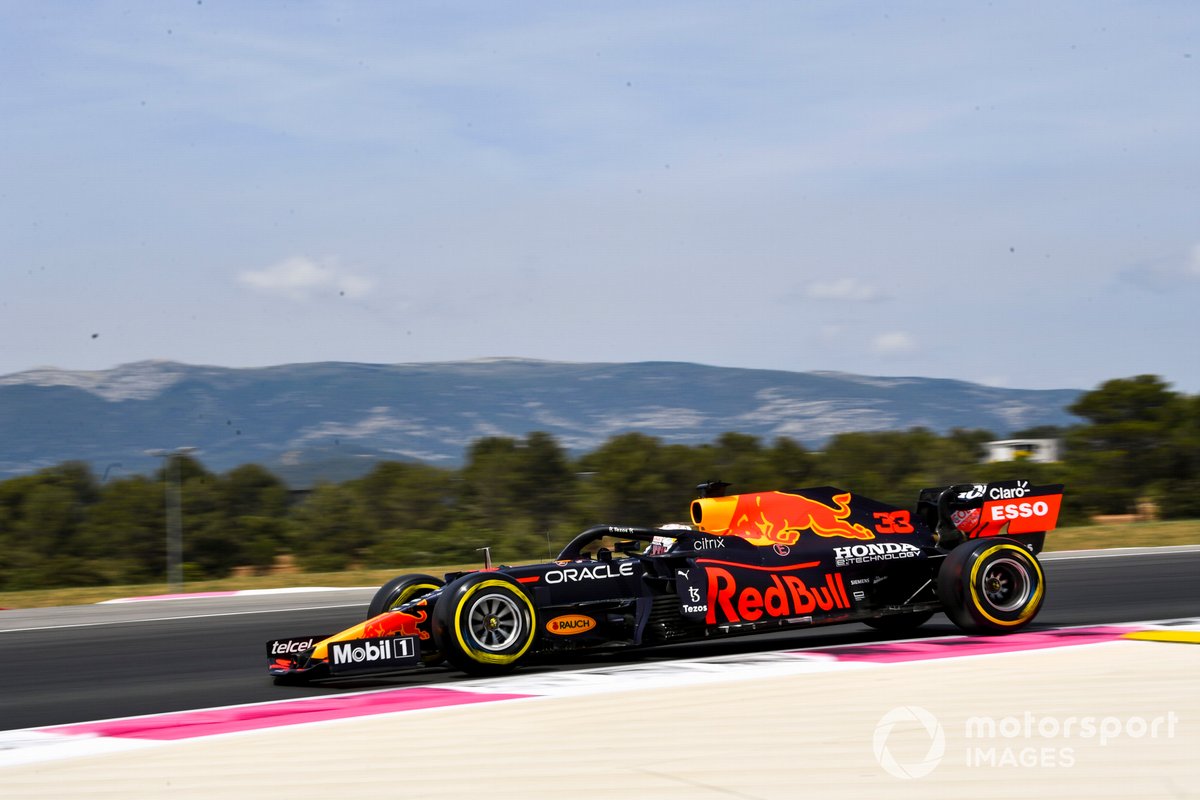 When asked about Red Bull’s chances of inflicting a first Mercedes race defeat at Paul Ricard since it re-joined the F1 calendar, Verstappen said of his practice long-run pace: “It felt good yesterday in FP2.”

“But, of course, we have to wait and see what the weather will do in the morning [rain has been predicted pre-race]. But I’m quite confident.”

The F1 timing screens indicated that Verstappen had gone off track and continued at Turn 2 on both his Q3 runs.

Here, the exit of the track that is not policed for track limits, but does have several large kerbs running almost perpendicular to the circuit behind the normal red/white kerbs at the exit of the corner, which caused damage to Verstappen’s car in FP2 when he ran across the raised kerbs and did likewise to Valtteri Bottas in FP1.

Verstappen was heard asking Red Bull to check his front wing between his Q3 runs, which he said was “just to double check” and was something “I do quite often”.

“But I think it was fine,” he said of his Turn 2 line in qualifying.

“As long as you don’t hit those yellow sausages then you’re fine. I knew I didn’t touch them and just straightaway knew the front wing should be fine.”

Verstappen improved by 0.335s on his final Q3 lap, having led the top 10 shootout session after the opening runs.

He said the gain was down to “just general understanding of the track”.

“And of course,” he added. “We did two runs with the medium in Q2, so then you go out in Q3 on the soft and you’re always a tiny bit under the potential in your first run.

“And then on the second run, you know where you left a bit of lap time, so you’re just gaining more or less every corner – just a tiny bit. And I think that’s where the lap time comes from.”