Russia has agreed to release $500m in credit to Belarus and look to increase the number of flights between the two countries as the Kremlin doubled down on its support for Alexander Lukashenko after his forced landing of a passenger flight that has sparked western condemnation.

Russian president Vladimir Putin hosted Lukashenko in Sochi on Saturday, treating his guest to a yacht trip on the Black Sea a day after the two men held talks for more than five hours.

The two-day summit has underscored Moscow’s position as the embattled autocrat’s closest and most reliable foreign ally, and took place as the US joined the EU in imposing sanctions against Minsk.

Russia’s support for Lukashenko was in stark contrast to US and EU condemnation and could complicate preparations for a summit between Putin and US president Joe Biden in Geneva next month, which has been billed as an effort to normalise relations between Moscow and the west.

Belarusian authorities used a bomb threat and a fighter jet to force a Ryanair flight travelling between Greece and Lithuania to divert to Minsk on May 23, where police then detained Roman Protasevich, a leading dissident journalist, who was on board. 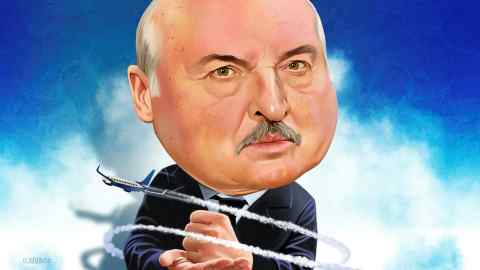 The EU has banned Belarus state airline Belavia from its airports and pledged to impose additional sanctions against the country, while Biden on Friday reimposed “full blocking sanctions” against nine Belarus state-owned companies.

The Kremlin has criticised the west’s response and, announced that a delayed $500m loan to Minsk would be released by the end of June.

The money represents the second tranche of a $1bn financial package Moscow agreed in December to bolster Lukashenko’s finances, which have been hit by the fallout from mass protests against his fraudulent election victory last year, and the impact of Covid-19.

Kremlin spokesman Dmitry Peskov said the transport ministries of Russia and Belarus would work together to “organise air transportation” that would allow Belarusians to travel to Russia for summer vacations and to fly home from European countries via Russia, offsetting the impact of the EU’s flight ban.

“President Lukashenko informed [Putin] in detail about what happened to the Ryanair plane,” Peskov told reporters, adding that the talks were “very constructive, rich in content”.

The Kremlin has dismissed as “Russophobia” western claims that Moscow assisted Minsk in the operation to arrest Protasevich or was given advance warning.

The dissident founded a media channel that reported on and helped co-ordinate protests against Lukashenko.

Russia this week forced at least two European airlines to cancel flights to Moscow after it failed to approve new flight plans involving a detour around Belarus.