Impul driver Hirakawa was one of several drivers to get caught up in a melee at the first corner of Sunday’s delayed race, which was finally run over just 13 of the planned 42 laps owing to heavy rain and fog.

Hirakawa was tagged by the Inging machine of Sho Tsuboi at Turn 1, with both drivers spinning and getting beached in the gravel as a result.

But, with only half points being awarded, it meant Hirakawa only conceded three points to championship leader Tomoki Nojiri, who finished fifth, and remains second in the drivers’ standings.

He said that most drivers are likely to discard their scores from Autopolis at the end of the year, as only a driver’s best five scores out of seven races count towards their championship position.

“I didn’t know what happened at the time, I just knew I got hit from behind and lost the car, but I could see from the replay I could see that Tsuboi braked too late and hit me,” Hirakawa told Motorsport.com. “There was nothing I could have done. I think he just braked too late.

“This is racing, and sometimes accidents there are things you cannot control. Luckily though it’s half points, so maybe this a score we’re going to drop at the end of the season, so it’s sort of lucky [that it happened in this race, instead of a full-points race].”

Nojiri now leads by 25 points ahead of Hirakawa with four races to go – next month’s Sugo round, two races at Motegi and the season finale at Suzuka.

“It doesn’t matter [about the gap] now, I need to win at least two races; if I can win three, even better,” said Hirakawa. “If I can’t win, I think [Nojiri] is going to be champion. I’m really focussed on Motegi, it will be ‘my track’. So I’m really excited about that.”

Nojiri fought his way back to fifth after slipping outside of the top 10 on the opening lap, which was a result of him getting delayed in the first-corner tangle and making contact with the Dandelion Racing machine of Super Formula returnee Tadasuke Makino. 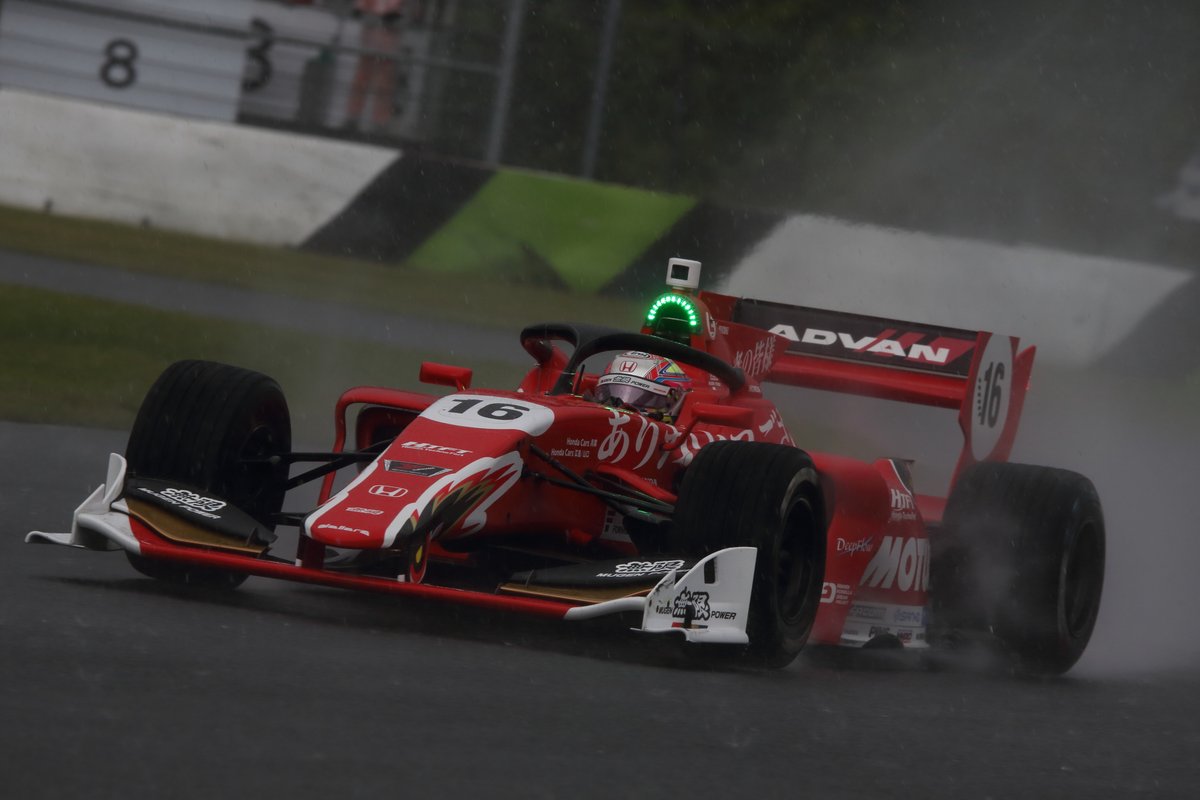 The Mugen driver set the fastest lap of the race during his recovery drive, and believes he could have fought with Giuliano Alesi for the victory had the race not been called off early.

But he was nonetheless happy to demonstrate his speed in the wet, following on from his wins in dry conditions at Fuji Speedway and Suzuka.

“I lost positions at the start due to the fact that I was blocked in front of me [by Makino], but from that point on, the pace was good and I was able to overtake,” Nojiri told Motorsport.com.

“This time it’s a half-points race, so I don’t think these points will count towards my final score, but I think being able to show my strength and speed in a race like this shows that I am a real threat to my rivals.

“Looking at the tyres, some drivers’ tyres were in bad shape but mine were good, so if we kept going with that same pace, I think I could have fought for the win if the race had continued.

“I think this race was all about the first corner, but even so I confirmed that I can run strongly even in the rain, so I am satisfied.”