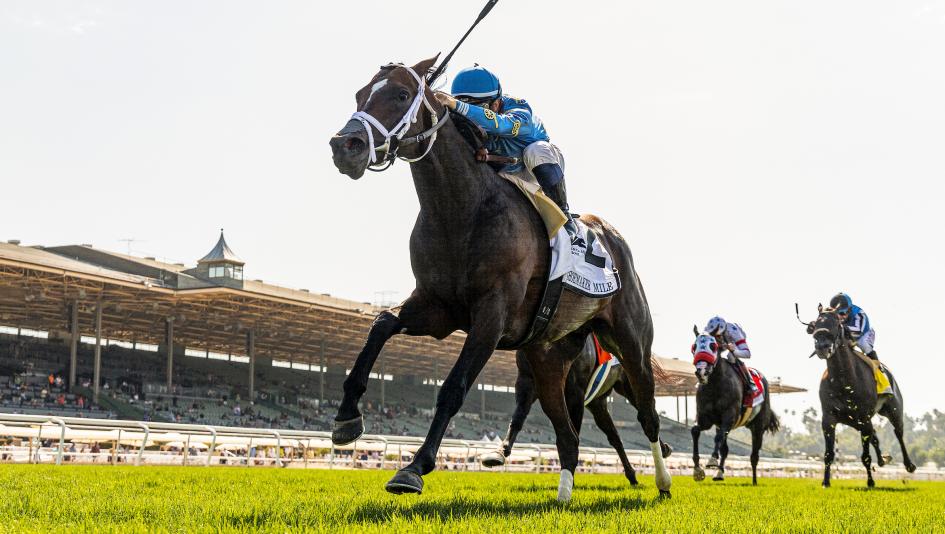 It appeared on paper that Smooth Like Strait might have an easy time on the front end in the $300,500 Shoemaker Mile Stakes.

As it turned out, not one, but two rivals in the field of six pressed the Cannon Thoroughbreds‘ homebred from the start – but it didn’t matter.

Living up to his 7-10 odds and taking an important step forward after narrow losses in Grade 1 stakes in his last two starts, Smooth Like Strait fended off the early challenges to pull away on the final turn and register a 1 1/2-length victory over Say the Word in the May 31 stakes at Santa Anita Park and collect an initial top-level victory.

“He deserves a Grade 1 win. He’s such a fighter,” jockey Umberto Rispoli said. “I was waiting for a big win for this horse. He deserves it and so does (owner Michael Cannon). (Cannon) has always been positive with me.”

Tallying a Grade 1 win seemed overdue for Smooth Like Strait after a pair of losses by a neck in both the Old Forester Bourbon Turf Classic Stakes (third) and the Frank E. Kilroe Mile Stakes (second). By winning the Shoemaker, the 4-year-old son of Midnight Lute trained by Michael McCarthy also picked up a free “Win and You’re In” spot in the FanDuel Breeders’ Cup Mile in November at Del Mar via the Breeders’ Cup Challenge Series.

“It’s our first Grade 1 win (for Cannon Thoroughbreds) so it’s huge for us and for the horse,” Cannon said. “I’m glad this race wasn’t any longer than a mile or we would have been in trouble, but he does that. He eases up when he’s all alone. When he accelerated turning for home, I felt great because that’s what he does when he wins.”

Cannon, whose racing operation started in 2010, has a stable of just five horses and admits he might have bowed out of the sport if not for Smooth Like Strait.

“We’re little guys in this sport,” said Cannon, who has 14 wins in 11 years from horses other than his Grade 1 winner. “I’ve been in the game a long time and until Smooth Like Strait came around I was a complete failure. I was ready to give up, but he sucked me back into the game and look where we are now.”

The victory was the seventh in 15 starts for Smooth Like Strait, who has earned $933,823 with five graded stakes wins.

“The horse responded beautifully to Umberto, they have become quite the partnership,” McCarthy said. “I’m super happy for the horse and the connections. I don’t think he was getting the respect he deserved earlier in the year, but he showed up and put together a nice campaign. He was so relaxed for Umberto out there today. I’ve had an immense amount of faith in this horse all along, and I really believe that there are big things coming for him later in the year.”

Breaking from post 2, Rispoli guided Smooth Like Strait to the lead heading toward the first turn, but they were quickly joined from the outside by Restrainedvengence  and Whisper Not, the 3.70-1 betting third choice. Ahead by a half-length after fractions of :23:46 and :46.43, Smooth Like Strait pulled away approaching the quarter pole and cruised to a 3 1/2-length lead in mid-stretch that was sliced to 1 1/2 lengths at the wire as 2.90-1 second choice Say the Word rallied from fifth to take the place spot. The final time was 1:34.19 over firm turf.

Agave Racing Stable and Sam-Son Farm‘s Say the Word was 1 3/4 lengths ahead of Restrainedvengence.

Cannon said summer plans have not been finalized for Smooth Like Strait but he will most likely stay in California to prep for the Breeders’ Cup.

In Santa Anita Park’s two other Grade 1 stakes on its Memorial Day card, Country Grammer outdueled Royal Ship to win the $301,000 Hollywood Gold Cup by a head, and Maxim Rate scored a 13.90-1 upset victory in the $301,000 Gamely Stakes.

Racing on the turf at Pimlico in Baltimore, Md. ...

Casse Runs Three Fillies in Bid for His Third Trillium

Hall of Fame trainer Mark Casse has three chances, in the form of Crystal Glacier , Heavenly Curlin , and Skygaze , to capture his third...