When I initially filmed and posted this video a decade ago, I had learned this phytate-disabling soaking technique from a famed cookbook called, Nourishing Traditions. This cookbook was based upon research into indigenous food preparation and diet by healthy tribes, detailed in the book, Nutrition and Physical Degeneration, originally published in 1939 by Dr. Weston A. Price.

The issue with phytic acid is summed up in this article by the authors of that cookbook, Sally Fallon and Mary G. Enig:

“Animals that nourish themselves primarily on grain and other plant matter have as many as four stomachs. Their intestines are longer, as is the entire digestion transit time. Man, on the other hand, has but one stomach and a much shorter intestine compared to herbivorous animals. These features of his anatomy allow him to pass animal products before they putrefy in the gut but make him less well adapted to a diet high in grains—unless, of course, he prepares them properly. When grains are properly prepared through soaking, sprouting or sour leavening, the friendly bacteria of the microscopic world do some of our digesting for us in a container, just as these same lactobacilli do their work in the first and second stomachs of the herbivores.

…Our ancestors, and virtually all pre-industrialized peoples, soaked or fermented their grains before making them into porridge, breads, cakes and casseroles.”

And WHY are phytates (phytic acid) a problem? Because they bind to metal ions; blocking the absorption of key minerals like calcium, magnesium, iron, and zinc.

Well, a lot more research and experimentation into phytates (and other anti-nutrients found in plants) has been done since then and we now know it is not so simple as just soaking grains in an acidulated medium overnight.

This lengthy article by Ramiel Nagel was compiled over many years and pulls all the information together into one place. I’ve cherry-picked information relating to the top questions/concerns I hear from readers, but I do encourage you to read the entire article. It contains extensive information on every aspect of soaking/sprouting to disable phytates, including detailed indigenous food preparation techniques.

Phytic acid is also called inositol hexaphosphate (IP6) and it functions as the main storage form of phosphorus within the plant. A key point to understand in this discussion is that the phytates in food are disabled by an enzyme called phytase. And each food (tuber, nut, seed, bean, grain etc) that contains phytic acid (phytates) also contains phytase. BUT you have to unlock or activate the phytase before it can do it’s job. Soaking in an acidulated medium, as per my video, activates phytase – which then reduces phytic acid. Sounds good so far, right?

The problem is that it either doesn’t activate it enough, or the food itself doesn’t contain much phytase enzyme, “For example, corn, millet, oats and brown rice do not contain sufficient phytase to eliminate all the phytic acid they contain.”

Then commercial food prep can further complicate things. In the case of oats (oatmeal, oat flour, etc) vendors purposely heat oats to stop them from going rancid, but this also destroys the phytase. So then acid soaking doesn’t do any good because you have no phytase left to activate anyway!

“Phytase is present in small amounts in oats, but heat treating to produce commercial oatmeal renders it inactive. Even grinding a grain too quickly or at too high a temperature will destroy phytase, as will freezing and long storage times.”

Nagel’s article goes into detail about how to deactivate the phytic acid in most foods we consume. If you are currently on the GAPS or SC Diet then you definitely need to learn how to properly prepare your nuts and nut flours:

“Based on the accumulation of evidence, soaking nuts for eighteen hours, dehydrating at very low temperatures—a warm oven—and then roasting or cooking the nuts would likely eliminate a large portion of phytates.

Nut consumption becomes problematic in situations where people on the GAPS diet and similar regimes are consuming lots of almonds and other nuts as a replacement for bread, potatoes and rice. The eighteen-hour soaking is highly recommended in these circumstances.”

Note that nuts should be soaked in salt, not acid (whey or lemon) and be sure to soak for 18 hours. Then dehydrate. Then roast. Now you’re ready to bottle them, grind them into flour, or into nut butter.

On the positive side, Nagel also details how other nutrients like Vitamin C, D, Calcium etc. can balance out the problems caused by phytic acid – so you need to look at your whole dietary picture, not just isolated components. As Nagel sums up:

“It is not necessary to completely eliminate phytic acid from the diet, only to keep it to acceptable levels. Daily consumption of one or two slices of genuine sourdough bread, a handful of nuts, and one serving of properly prepared oatmeal, pancakes, brown rice or beans should not pose any problems in the context of a nutrient-dense diet. Problems arise when whole grains and beans become the major dietary sources of calories— when every meal contains more than one whole grain product or when over-reliance is placed on nuts or legumes. Unfermented soy products, extruded whole grain cereals, rice cakes, baked granola, raw muesli and other high-phytate foods should be strictly avoided.”

But Are Phytates Really Bad? 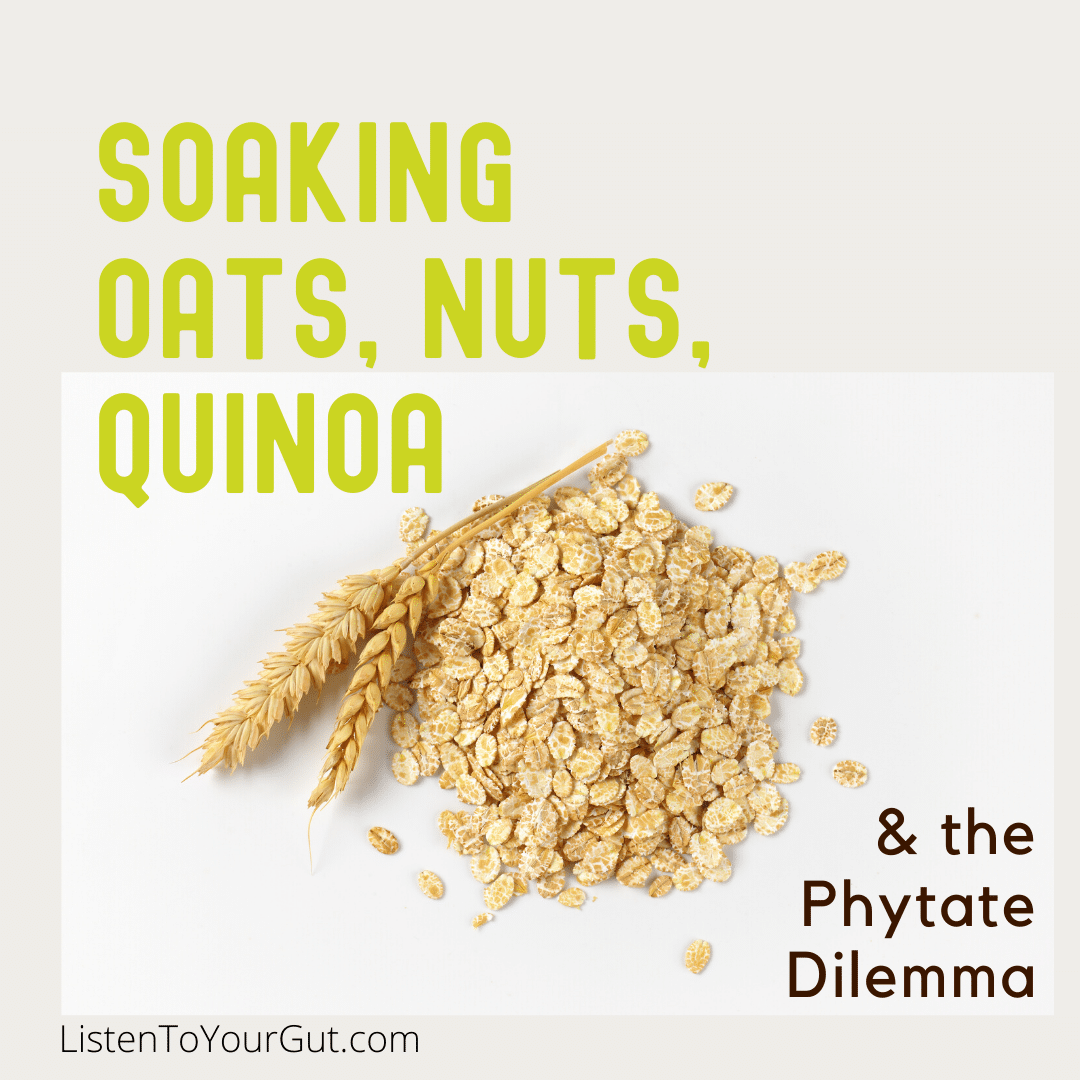 Going completely to the other side of the issue, are vegan health activists like Michael Greger MD who reference clinical trials showing that phytic acid has beneficial effects, like anti-cancer activity, it’s used as a preservative due to it’s antioxidant capability, and several studies on osteoporosis showed that phytates increased bone density.

So this is truly puzzling… how can something that contributes to tooth decay also improve bone health (same minerals are involved)? And if phytates are actually beneficial, then why does every indigenous culture (that has lived healthily for thousands of years) deactivate them?

Dr. Greger also asserts that other foods like garlic and onions (which are often cooked together with beans) can enhance the bioavailability of minerals like zinc and iron, so that balances out the phytate inhibition.

Dr. Joel Fuhrman presents the remarkable data of an extensive study on the beneficial effects of eating nuts and seeds:

“In the Physicians Health Study, which followed 21,454 male physicians for 17 years, the most dramatic relationship between any food and survival was the reduced mortality associated with nut consumption 2 or more times per week (compared to no nuts or seeds). In this study, nuts and seeds had antiarrhythmic and antiseizure effects—associated with a 60% reduction in sudden cardiac death. These benefits are not limited to meat-eating populations; significant lifespan benefits are seen in nut-eating vegans as well. In the oldest Adventists (over 84), a 39% decrease in coronary heart disease death was demonstrated comparing those with higher (5 times weekly) to low nut and/or seed intake.”

I think it’s safe to assume that those 21,000 docs were not soaking, dehydrating and roasting their own nuts.

A friend of mine with a doctorate in Immunology who is in superb health subsists mostly on nuts (especially almonds and pistachios), yoghurt and chia. She also walks at least 5 miles per day, does work she loves, and gets out in nature for extended periods. Remember that health is a holistic state; it is not just about food.

After looking at all the information, I’m going to keep doing what I’ve already been doing for years (as I discovered how to heal my entire family’s tooth decay, along with maintaining excellent whole-body health) to address this phytate issue:

Remember that for pretty much any food-related issue, you could research doctors, nutritionists and clinical trials and find half that say yes, and half that say no. Especially when each ‘expert’ has a personal (environmental, moral, ethical) or political agenda at play.

So at all times, listen to your gut! Your own body knows better than anyone else (or any data) what it wants, what it needs, and what feels good at this time. And that’s my second point; people are obsessed with finding THE diet. In my experience, what my body likes and needs has shifted depending on my age, hormones, stress levels, physical fitness, etc. (you can find some of my favorite recipes here). Even my horses forage 25-30 different plants per day, flexing according to what their body wants needs, the seasons, nursing, adolescence, etc.

When you’re healing your gut and restoring your microbiota, your dietary needs can also shift dramatically according to where you’re at in the process. Healing often has to be done in layers, so your body may need to receive nutrients in forms that would be ‘unhealthy’ for a fit, strong person – like an elemental shake, or congee porridge. Don’t get hung up on opinion, or research, or data that trends according to financial, political, or religious/ethical ideas. Listen to your own gut.

Another Crocodile Sighting In The U.K.

Extreme Decadal Wind Variability Adds Uncertainty to Climate Predictions – Watts Up With That?