Spanish GP the best Williams has ever felt in race-trim

Spanish GP the best Williams has ever felt in race-trim


After pitting early on during the safety car period caused by Yuki Tsunoda’s stranded AlphaTauri, Russell tagged on to the back of Alpine’s Fernando Alonso and was in solid contention for a top ten finish throughout.

In the end, the team’s push to get through the race with just a single stop did not quite work out, as the tyres went off and Russell fell down the order.

However, the Briton backed the team’s strategy gamble and was encouraged by how the car felt after the team’s struggles to emulate its qualifying form in races.

“I’m really pleased that we rolled the dice and we found ourselves in that position,” said Russell.

“I think in those fine margins, who knows what would have happened had I cleared him [Alonso], but all in all I think we did a really good job.

“The car felt today the best it has ever felt in a race, and probably the best I can remember. That is what makes it so joyous to drive compared to normal, most of which I put down to a calm day. We know the beast we have.”

This year’s Williams is widely known to have a peaky aero characteristic, which means it produces overall good downforce but can suffer when operating in windy conditions. 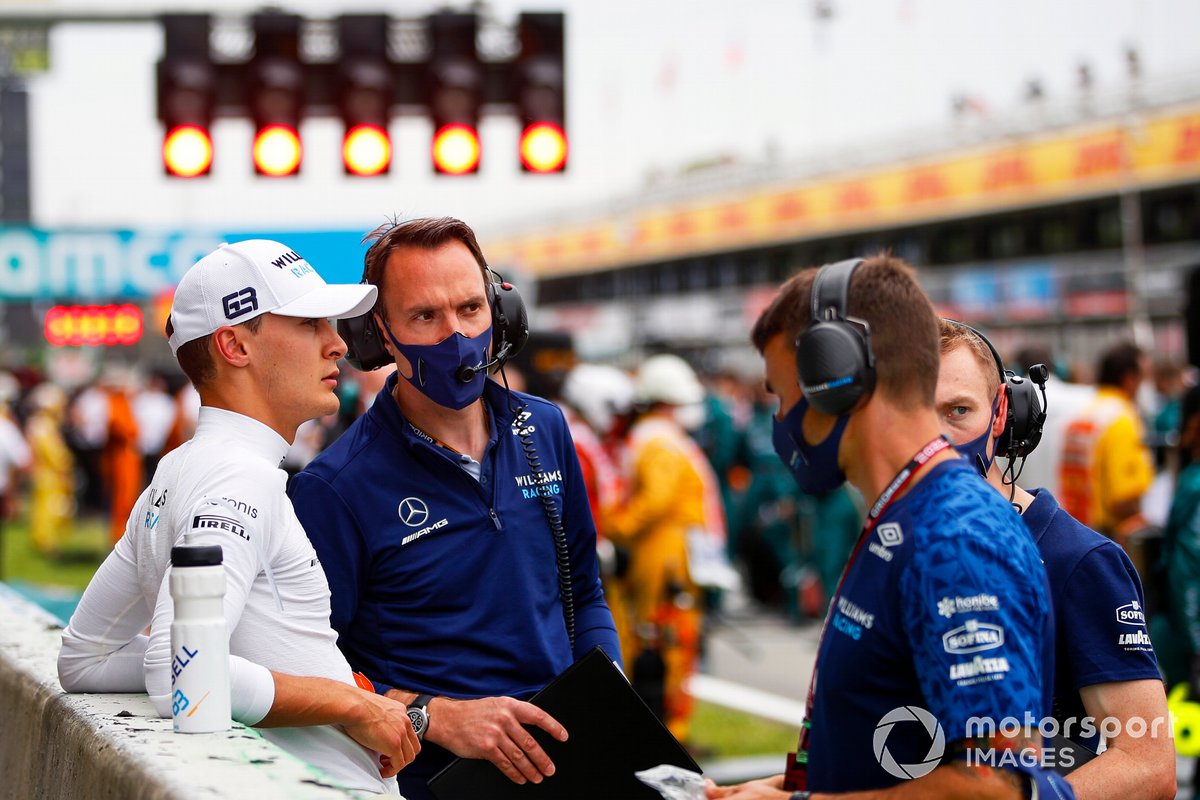 George Russell, Williams, with engineers on the grid

Russell suspects that the calmer weather in Barcelona on Sunday played a part in helping to deliver strong race pace.

“It was just a car on a consistent day,” he said.

“The wind was less than 10km/h and there were minimal gusts, which made the car consistent to drive. And when it is consistent as a driver, you can drive around it.

“I think that is something Nicholas [Latifi, team-mate] and I have really struggled with, especially in Portimao [where] that was really exposed.

“It was incredibly inconsistent and, as a driver, you lose all the confidence. Then it has a negative effect on the tyres and you just get this downward spiral.

“Whereas days like today, where the car is nice and consistent as a driver, you can really push it to its limit and manage the car and its tyres as you wish and really optimise everything.

“Don’t get me wrong, I’m sure a lot of people felt their car was a lot better. But we take a bigger jump when these conditions are favourable.”

Here4dBesthttp://here4dbest.com
Previous articleSony Now Expecting PS5 Shortages to Continue Into Next Year
Next articleGlickenhaus to enter one car for Portimao WEC race

FIA to slow down Formula 1 pitstops from Hungarian GP

Citing safety concerns, motor racing’s governing body has addressed complaints that the stops of some outfits are faster than can be achieved...

British GP to take place in front of capacity crowd

Despite a delay in lifting COVID-19 restrictions in the UK until 19 July, F1 officials remained confident of a bumper Silverstone crowd...