Standard Chartered’s pre-tax profits rose 18 per cent year on year in the first quarter, as the UK lender wound down its provisions for bad loans made during the coronavirus pandemic.

The emerging markets-focused bank beat analyst estimates, becoming the latest lender to benefit from an improving global economic outlook a year on from the start of the Covid-19 outbreak.

StanChart’s $1.4bn profit was higher than the $985m forecast by analysts, the bank said on Thursday. However, operating income was down 9 per cent year on year to $3.9bn, in line with expectations.

The bank took a $20m credit impairment charge, down $936m from the first quarter of last year. It cancelled $35m in reserves set aside for potential loan losses, far less than its larger rival HSBC, which announced the release of $400m of provisions this week.

Bill Winters, chief executive, said the economic recovery from Covid-19 had led to improved transaction volumes and profitability. “This was particularly the case in our financial markets and in wealth management, which had its best-ever quarter,” he said. “Despite low interest rates, we expect our underlying momentum to lead to income growth in the second half of 2021.”

Income at StanChart’s wealth management business grew 21 per cent due to strong sales on foreign exchange and equities products, the bank said.

Its Hong Kong-listed shares rose as much as 2.4 per cent after the results were announced.

The lender’s global footprint has put it in the middle of geopolitical tensions between the US, UK and China. Relations worsened last year after Beijing’s imposition of a sweeping national security law on Hong Kong following pro-democracy protests in 2019. 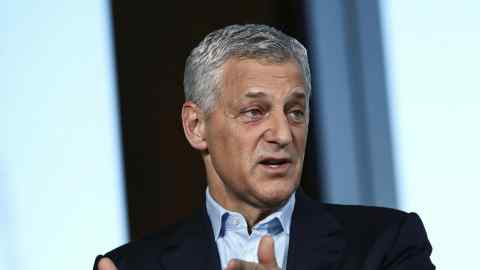 Winters said in February that he hoped Joe Biden, the US president, would re-engage with China and end “tit for tat” escalations in trade, but there has been little evidence of reconciliation.

StanChart has struggled to balance its commercial dependence on China with its mission statement to be “here for good”. It has also come under pressure from its board and investors to better define its positions on human rights and environmental issues.

HSBC reported a 79 per cent increase in net profit for the quarter to $5.8bn this week, significantly higher than the $3.3bn forecast by analysts.

Masayoshi Son has told shareholders that SoftBank will not prioritise short-term trading gains as the company behind the world’s most aggressive technology fund...