Kui people are an ethnic group in Surin, north-eastern Thailand. For many centuries, members of a Kui family have always included both humans and elephants. A Kui house features the space for humans, and the space for elephants—right under the same roof.Once fertile, the forest of Surin was extensively destroyed for commercial purposes in the last half-century. 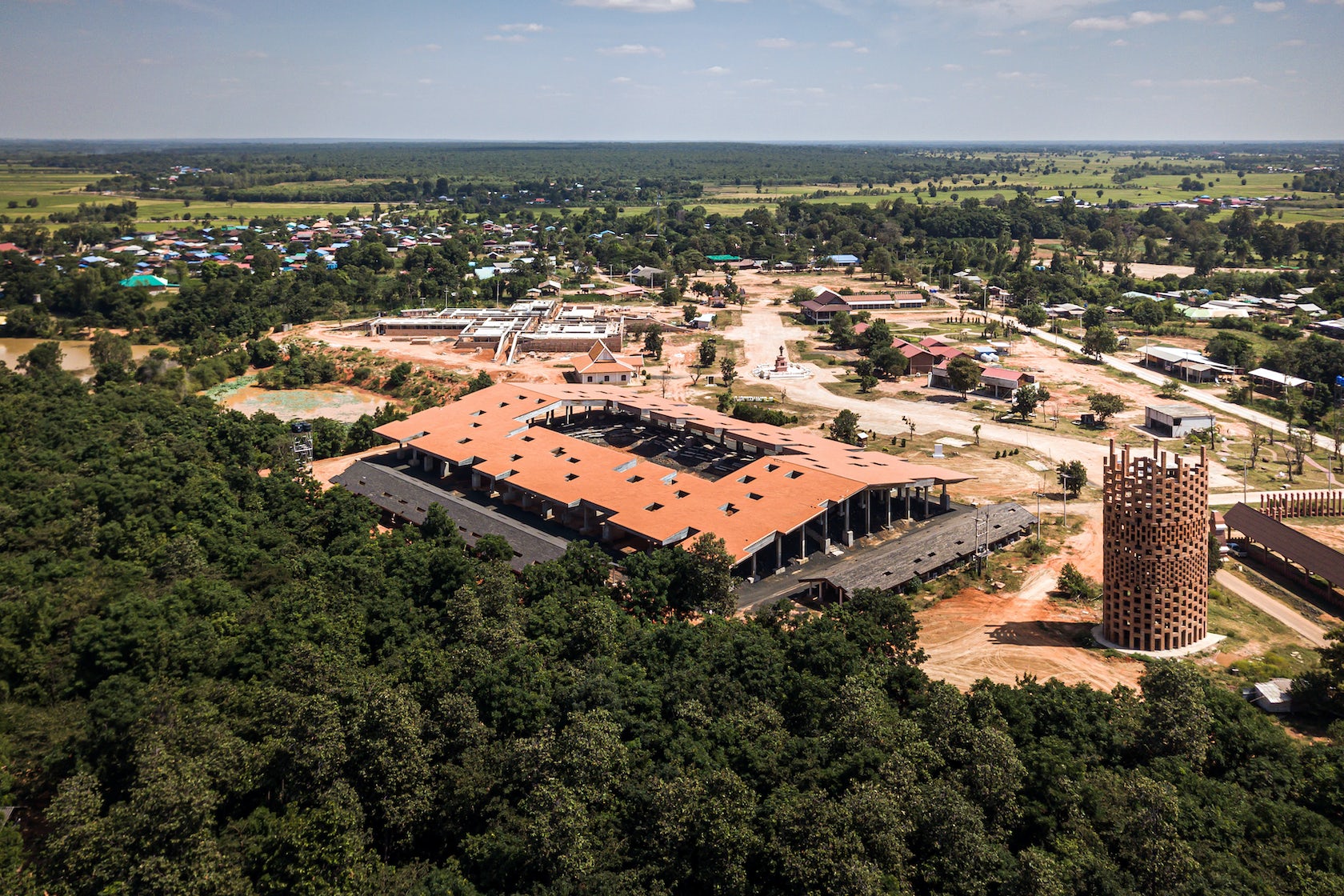 The Kui and their elephants, who had relied solely on the forest, suffered extreme droughts, shortages of food and medicinal plants the forest once provided. The two wandered the streets of tourist towns begging for food. Some worked in elephant camps, many with unsuitable living conditions and routine. Elephant World is a governmental project to bring the Kui and their elephants back to their homeland and to ensure the suitable living conditions for the elephants. 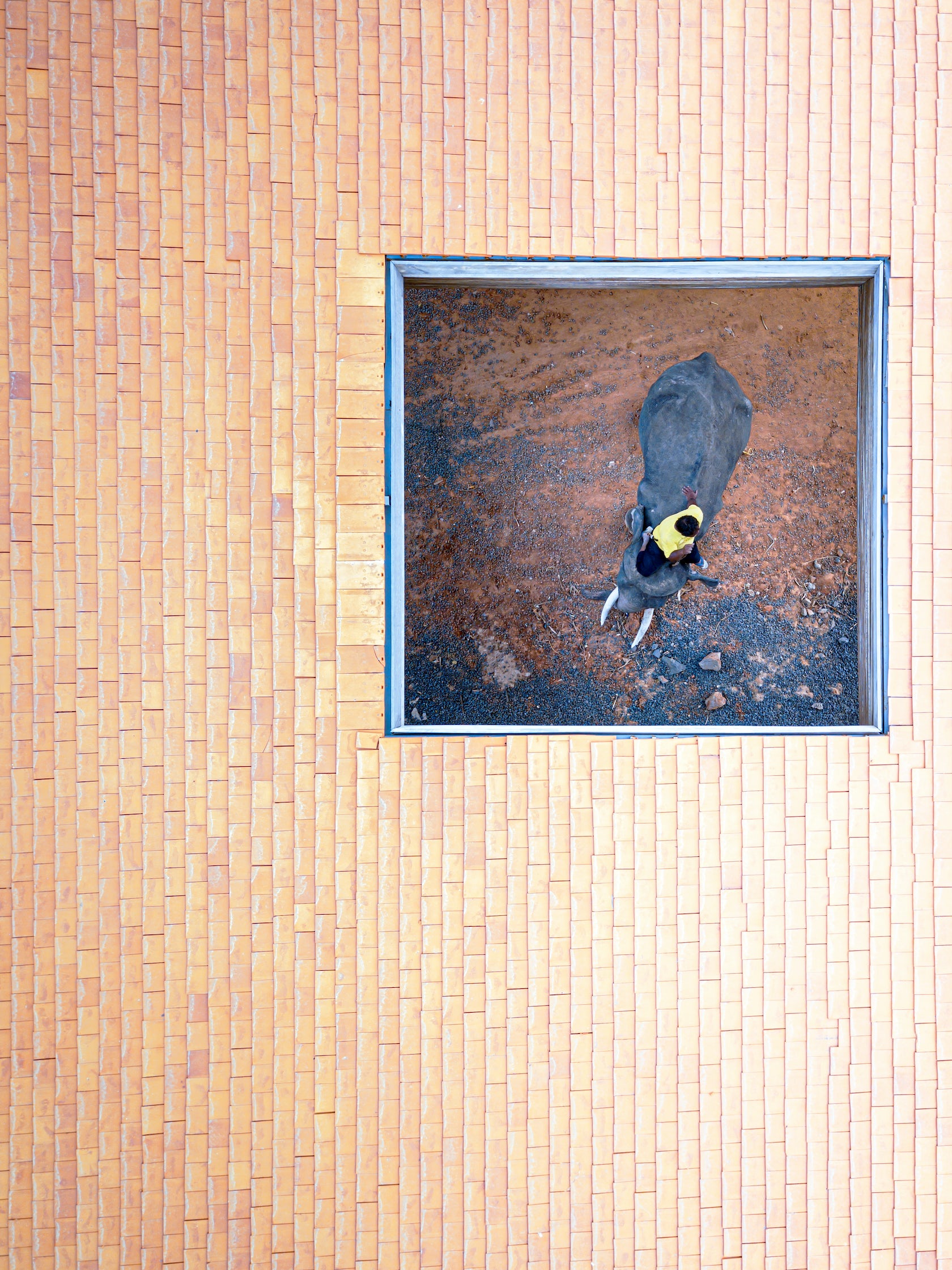 The project includes the Kui village, an elephant hospital, the pre-existing temple and graveyard for both humans and elephants, and a museum telling stories of the community’s age-old culture.

Dubbed ‘the Cultural Courtyard’, the 70×100 m sloping roof spans a large ground where cultural events and religious ceremonies from birth to death of humans and elephants could take place. 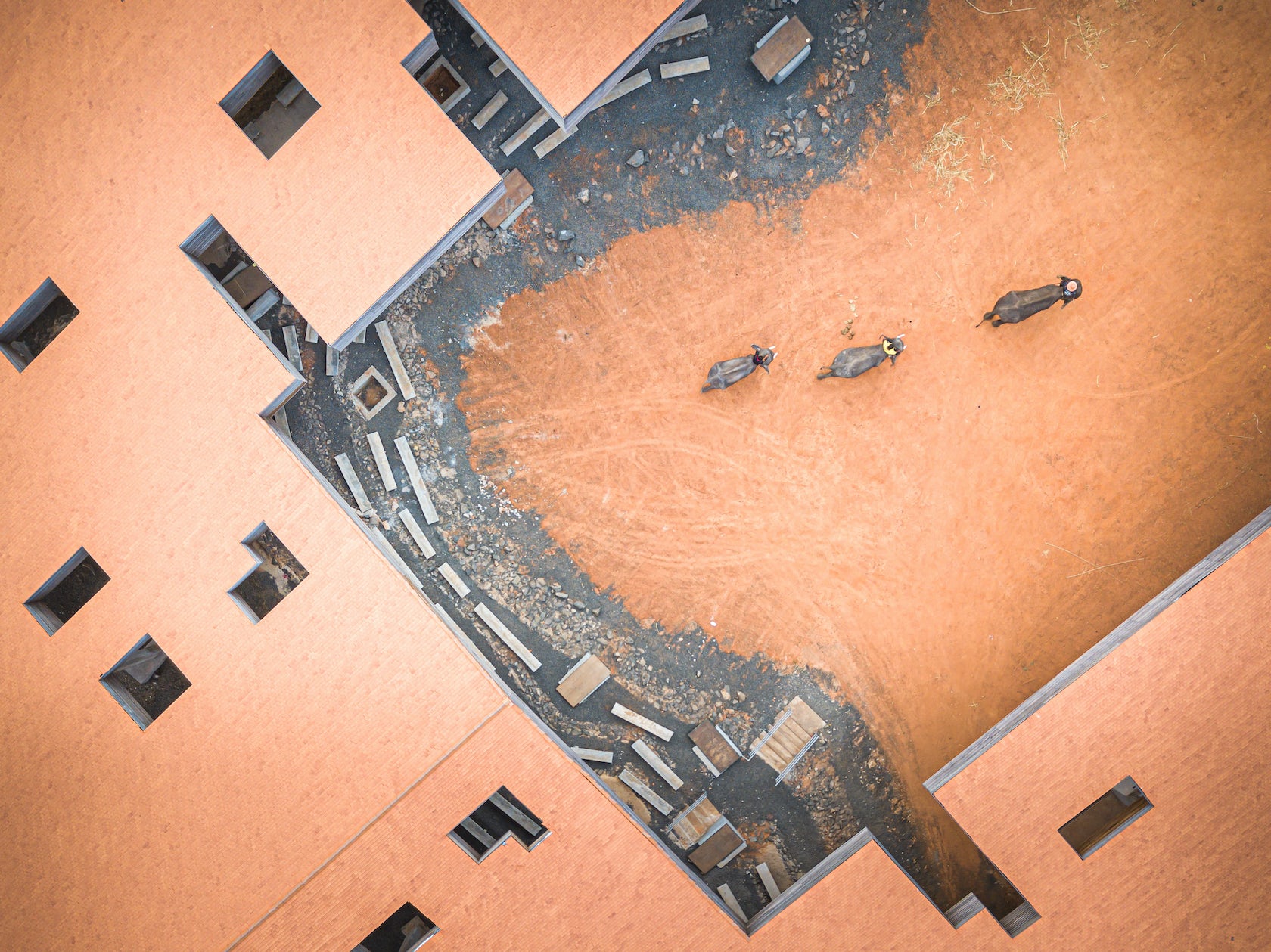 The 1.5-metre thick roof is open in the centre and punctured at various points to ventilate the space. The roof is low-lying, in harmony with the surrounding village. But once inside the generous height of the roof and the expanse of the cultural courtyard reveals itself.

Six mounds make up the landscape beneath the roof on 3 sides, leaving the fourth side open for users the size of elephants. 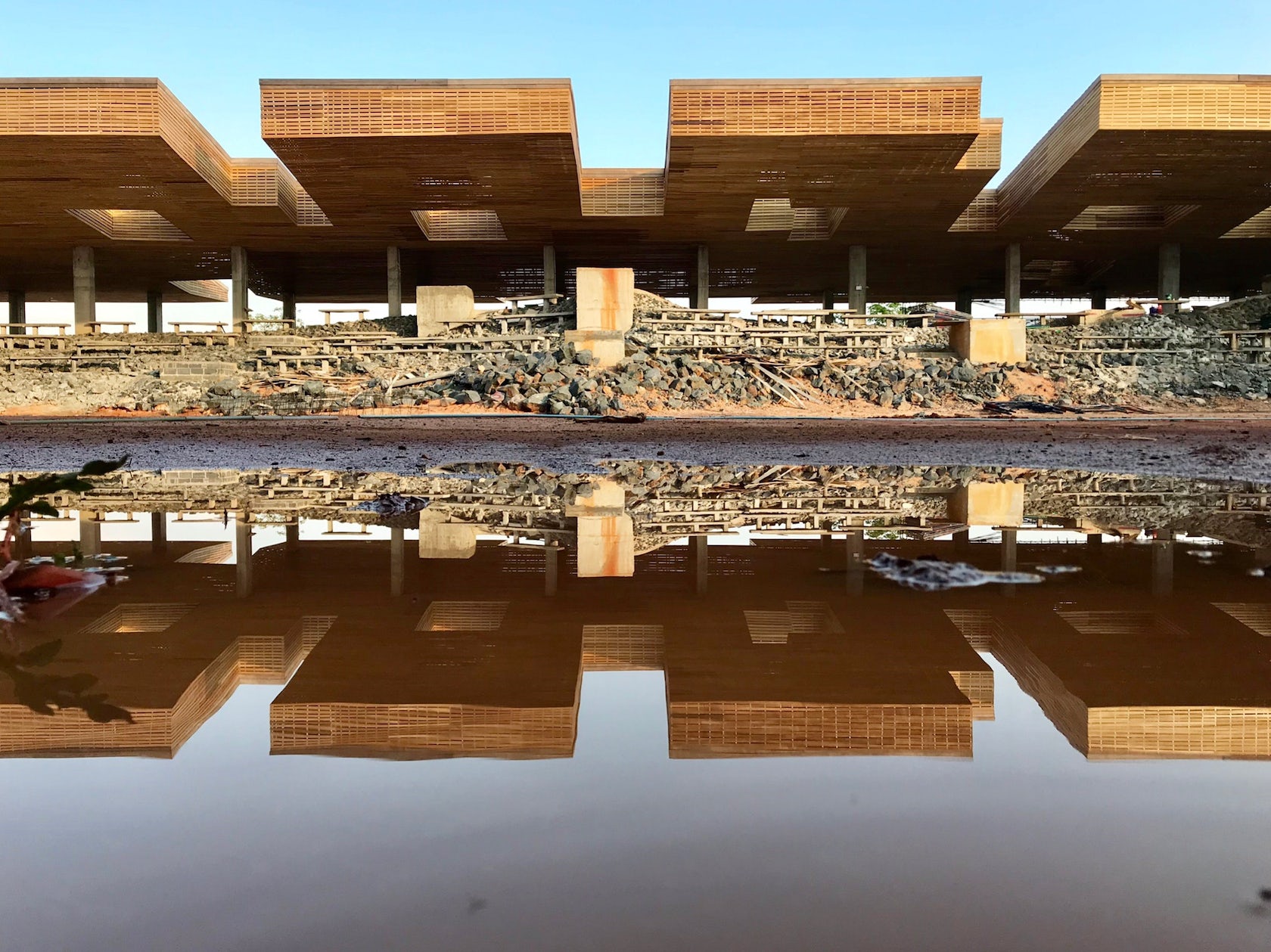 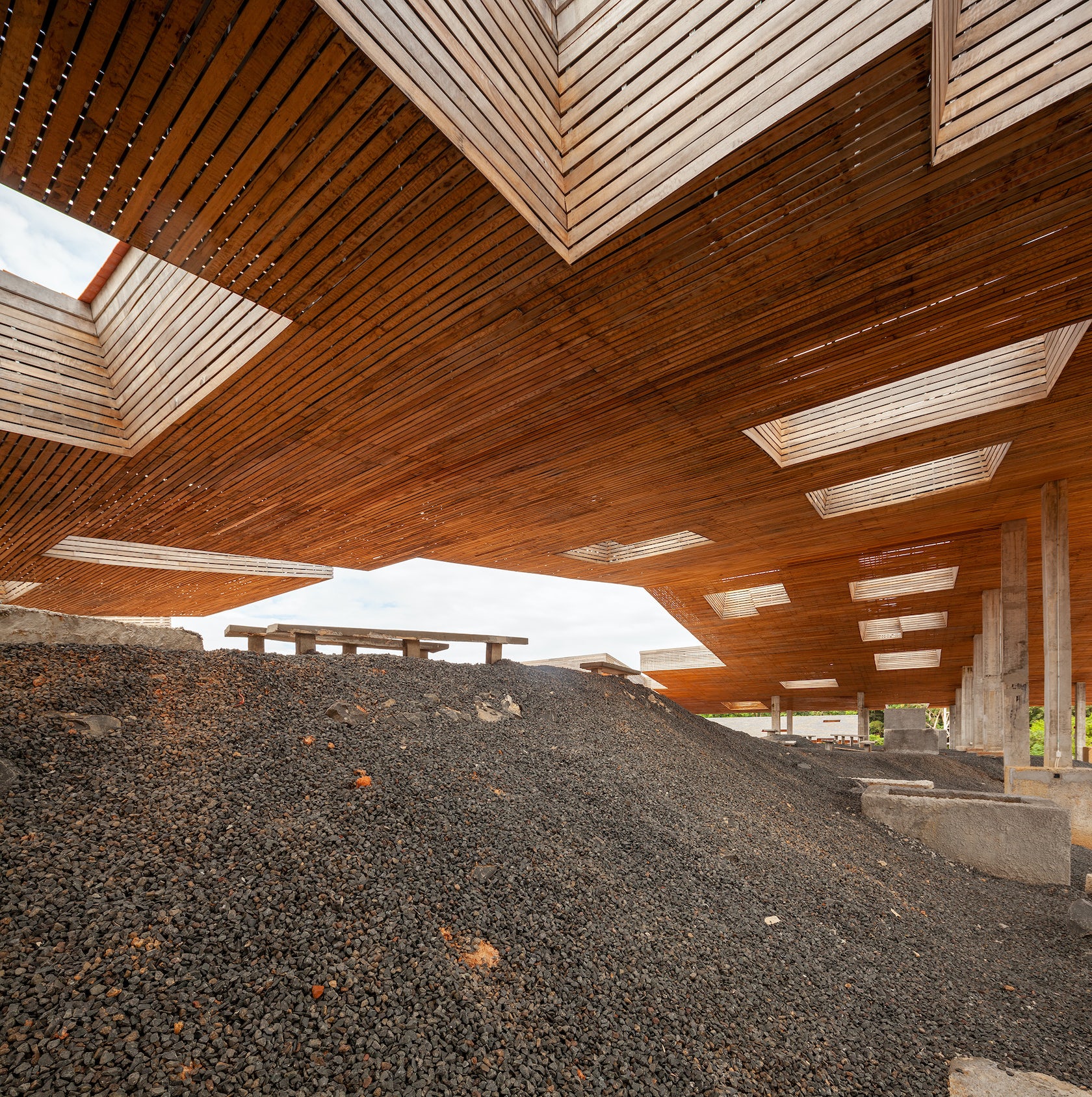 Sloping from 4 to 1.2 metres, the mounds evoke the rolling soil⁠ in which elephants romp around to cool the body temperature and protect from insects.The site is an arid plateau located 4 kilometres from the river. But the 200 elephants living here require more than 8,000 cubic metres of water per month. 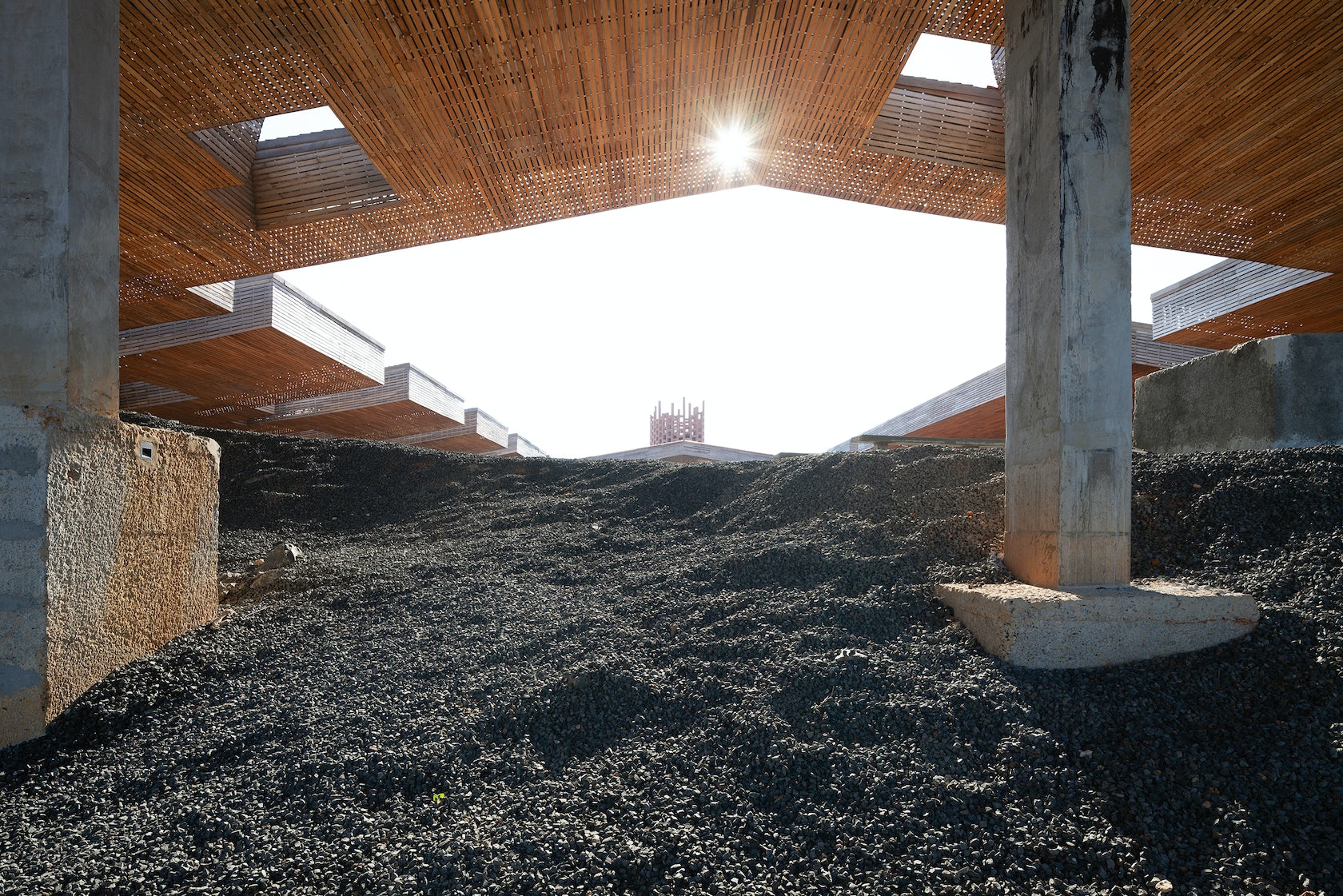 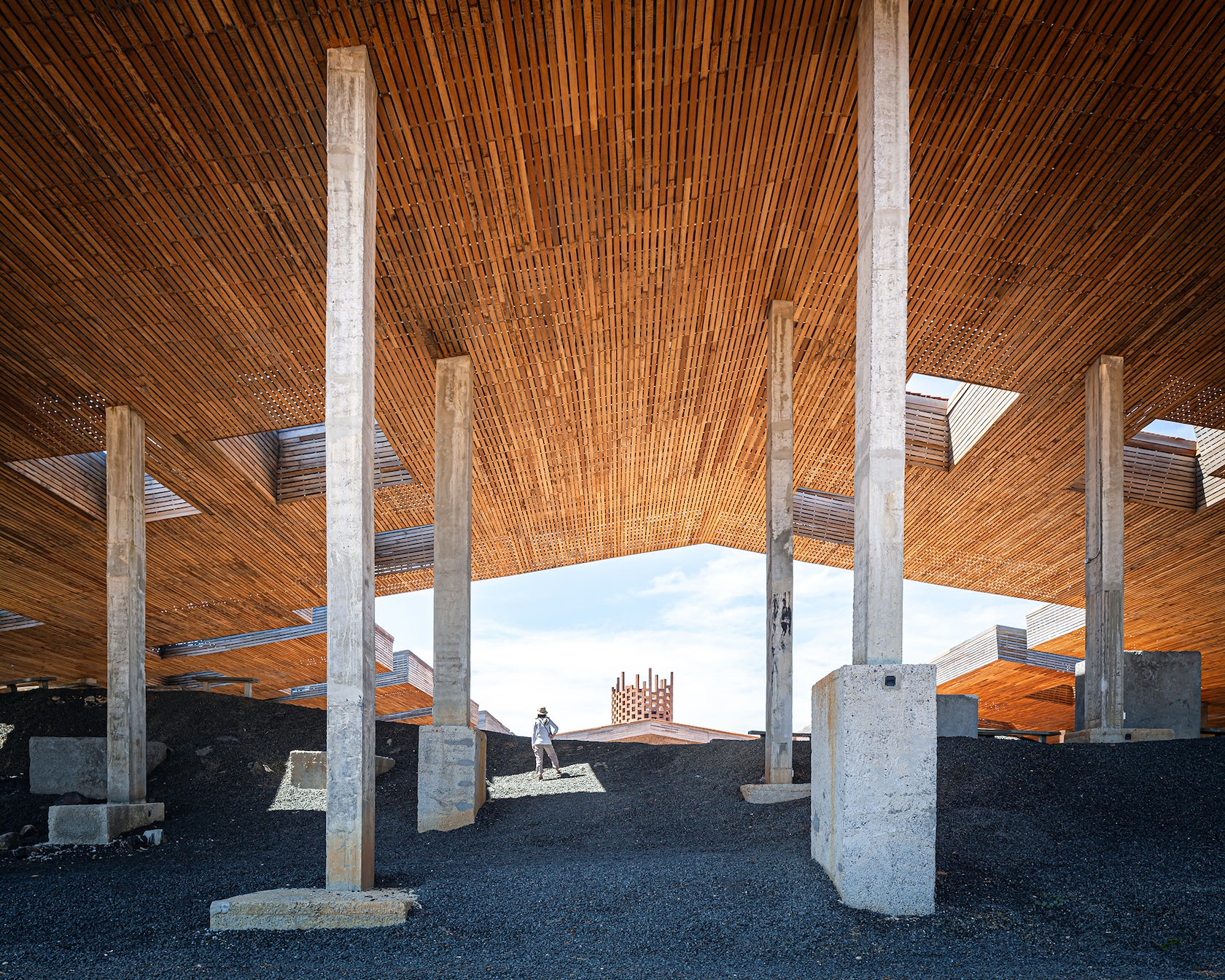 A rainwater collection pond was dug next to the site of the Playground. The resulting 8,500 cubic metres of soil is transformed into the 6 mounds forming the amphitheatre-like courtyard.Strengthening the mounds are basalt rocks sourced 40 minutes from the site. When basalt is mined to the groundwater level, the water wells up, forming a water reservoir. 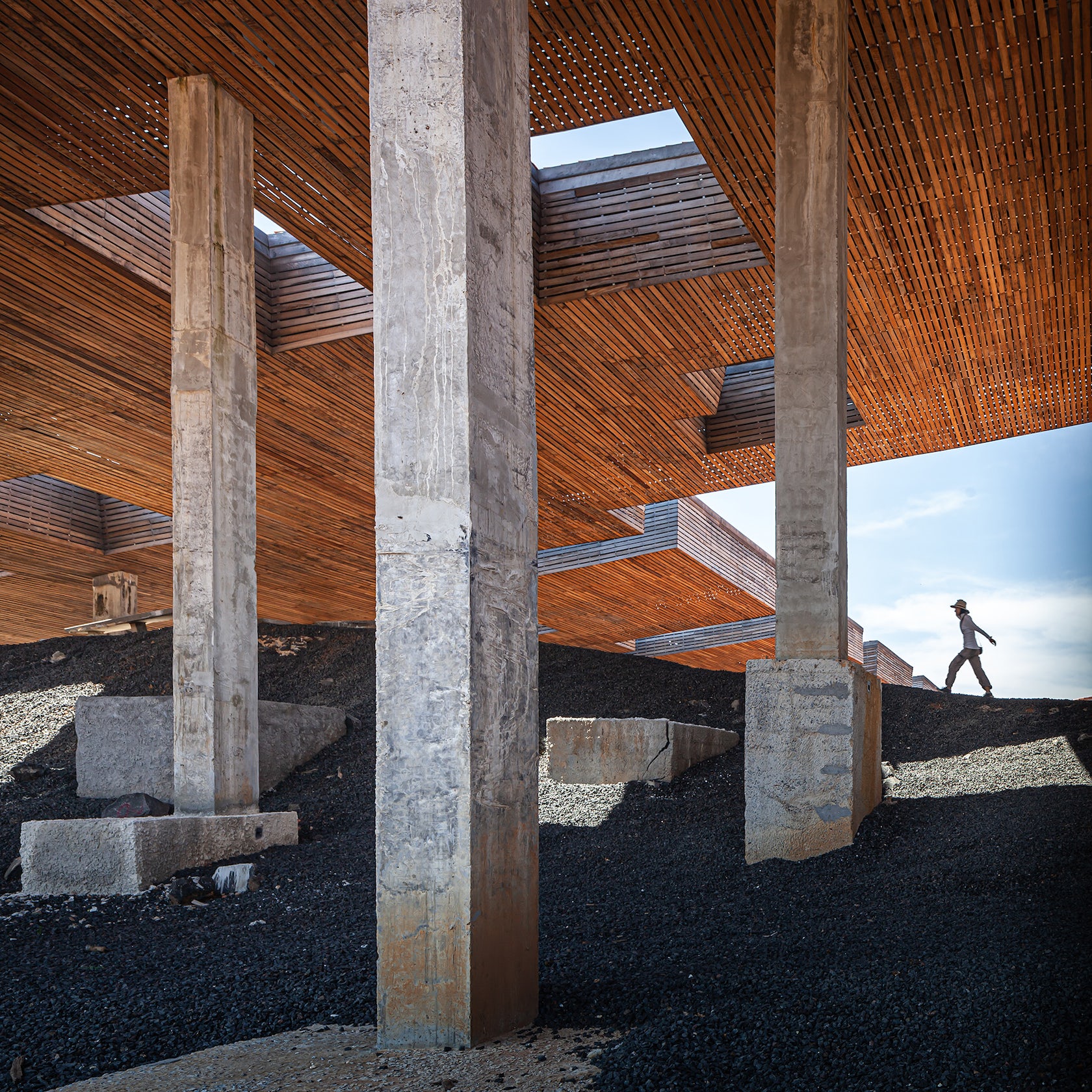 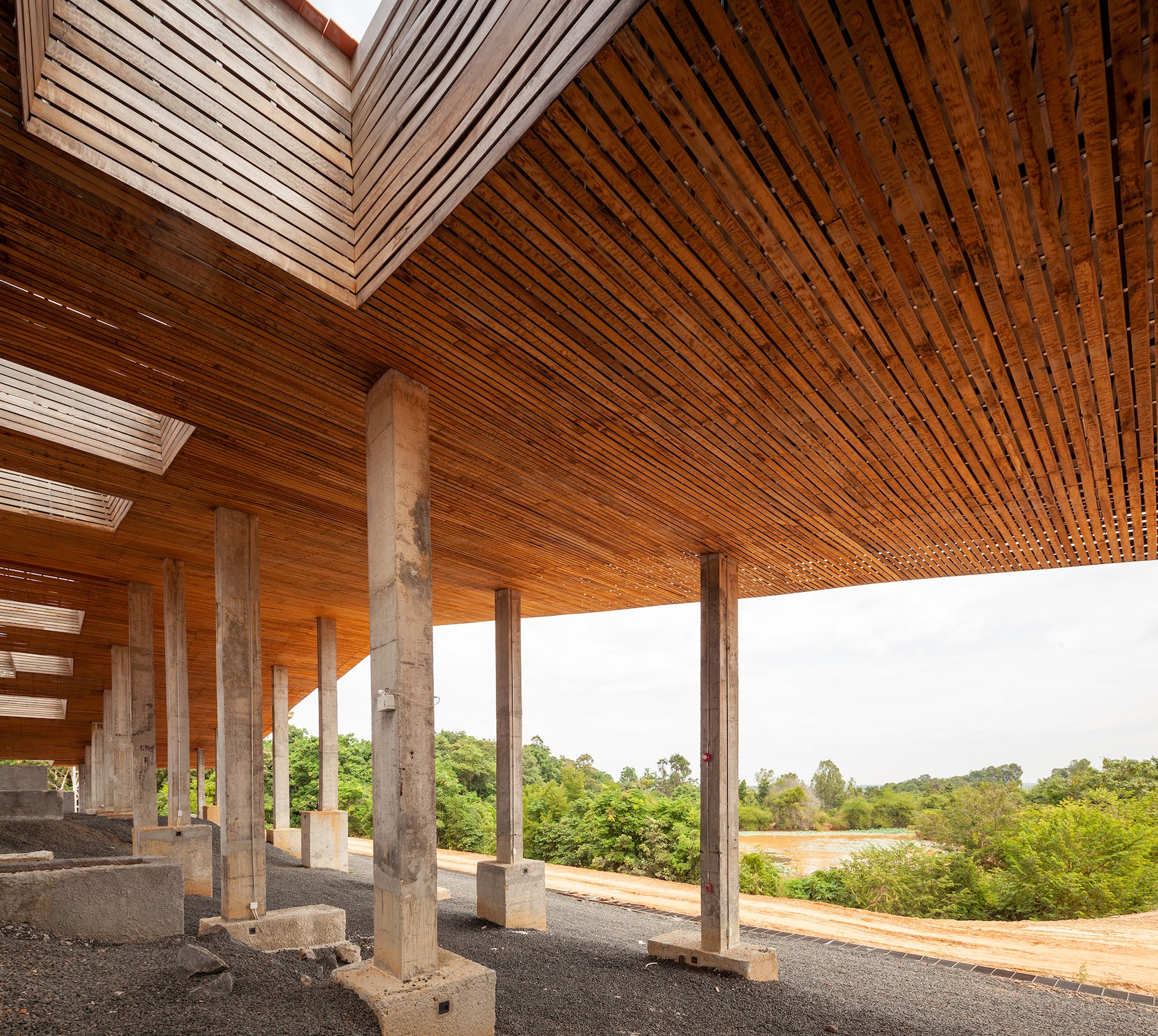 The construction of the Playground, consequently, creates another water reservoir in the neighbouring district.Six rows of concrete benches scatter on the mounds, forming seating for 800 visitors. Also dotting the landscape are 42 concrete pots where trees will be planted and grow through the roof openings, providing shading and food for the elephants. At the Playground, the process of making architecture gives rise to sustainable coexistence. 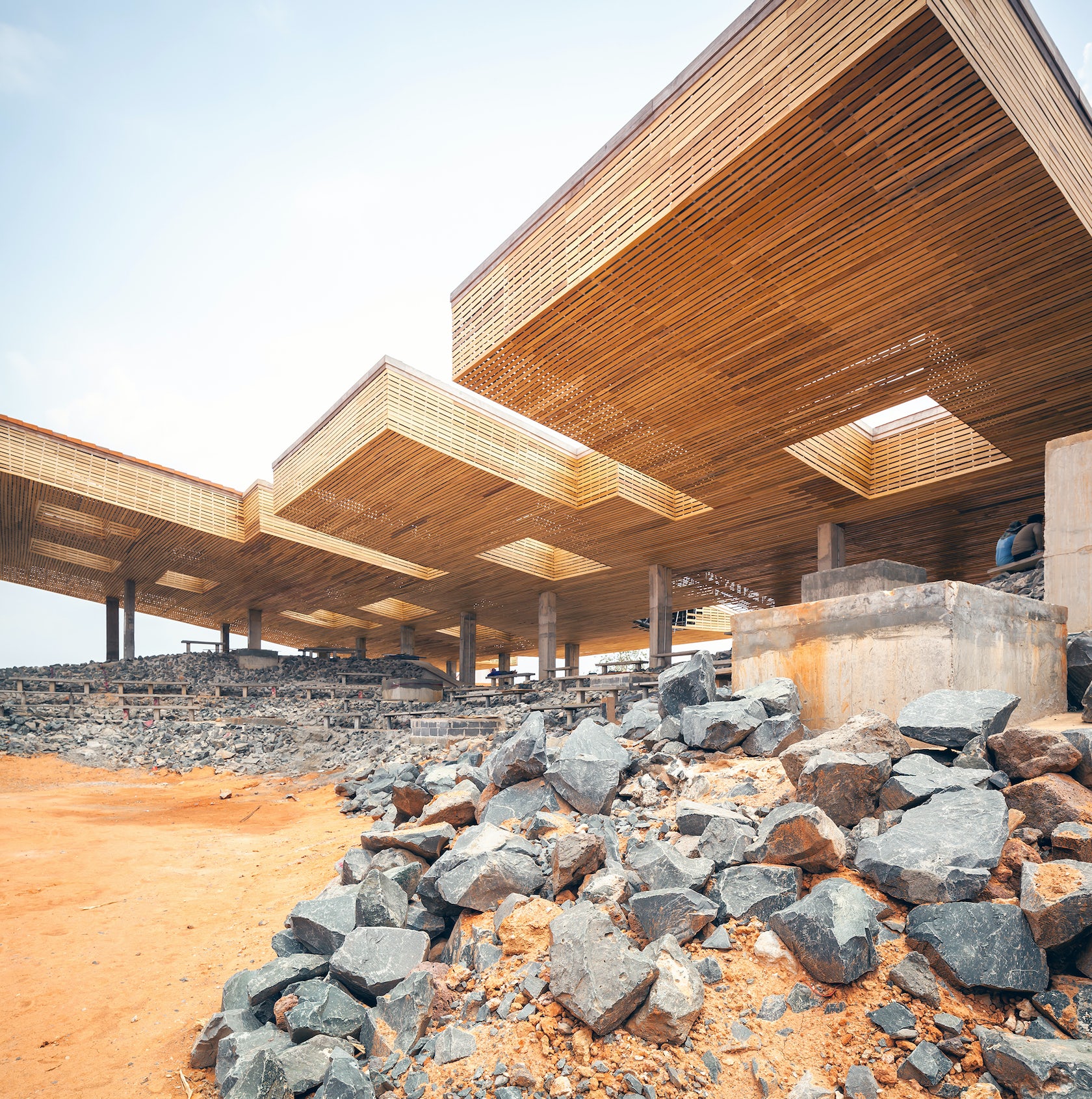 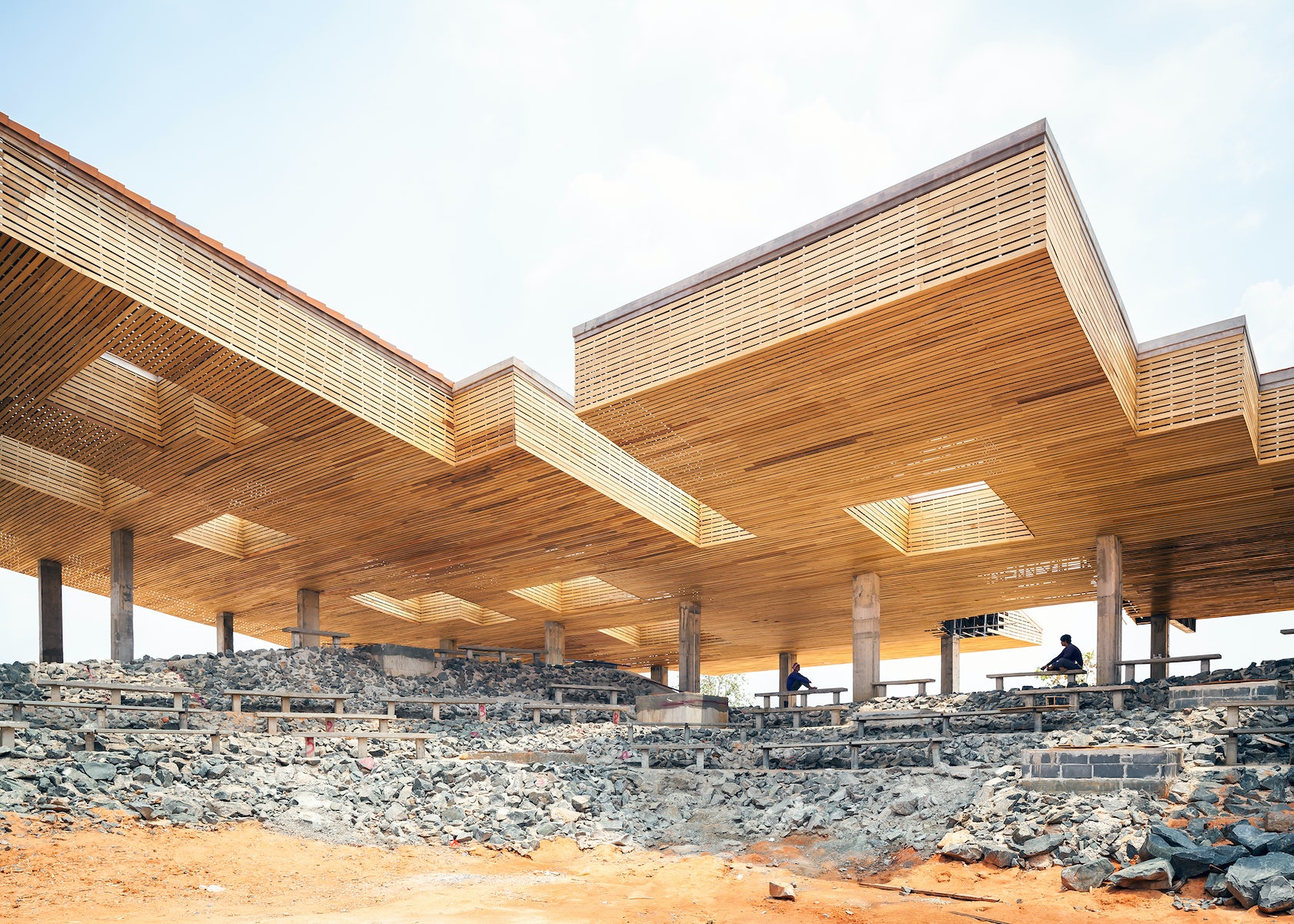 With new water sources resulting from the construction, moisture has returned to the barren land. The Kui can now care for the newly-planted trees, maintain the water sources and revive the forest. The bond between the two is the catalyst towards a sustainable future. In this future, they will live under the same roof again, just like their ancestors did. 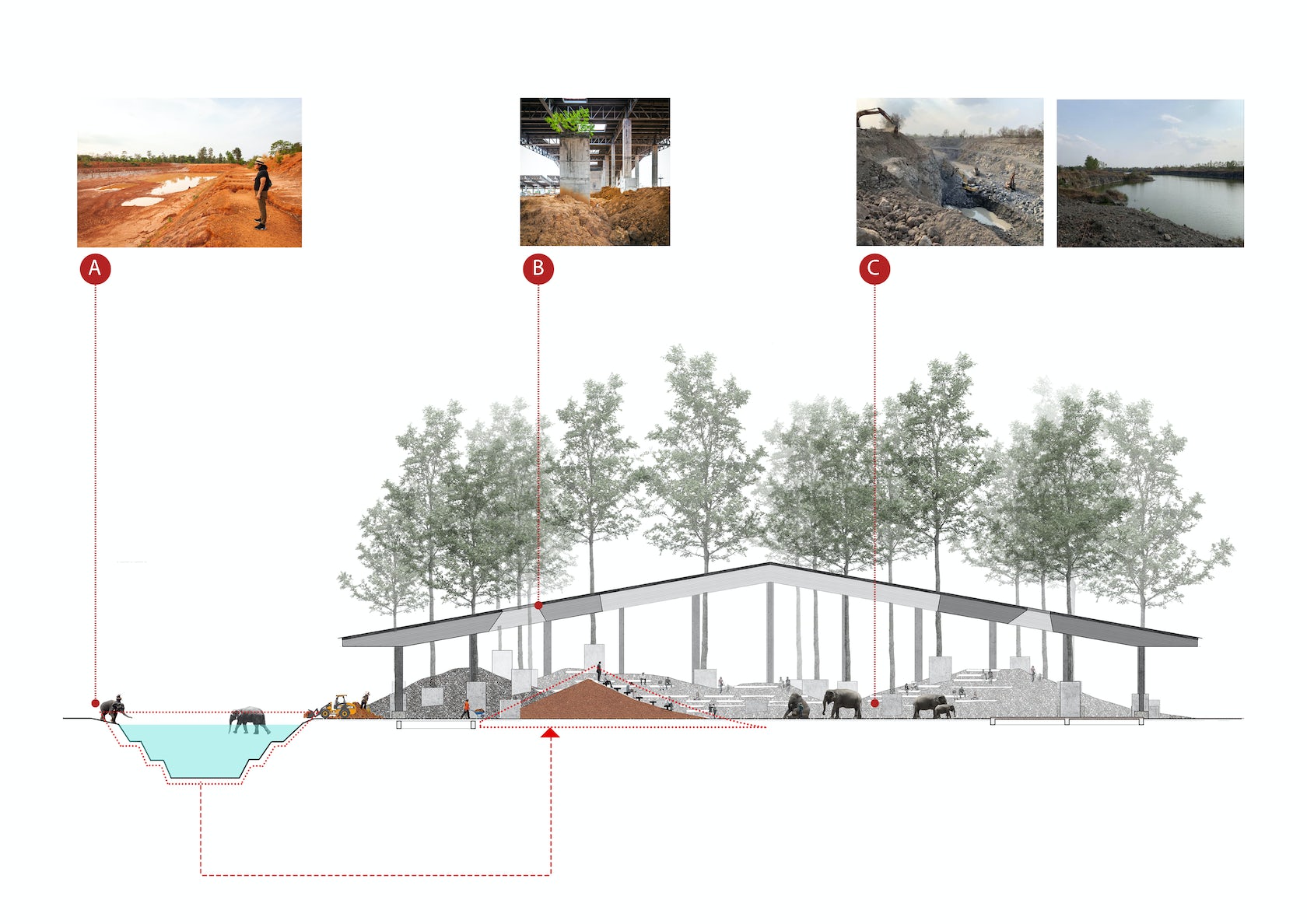 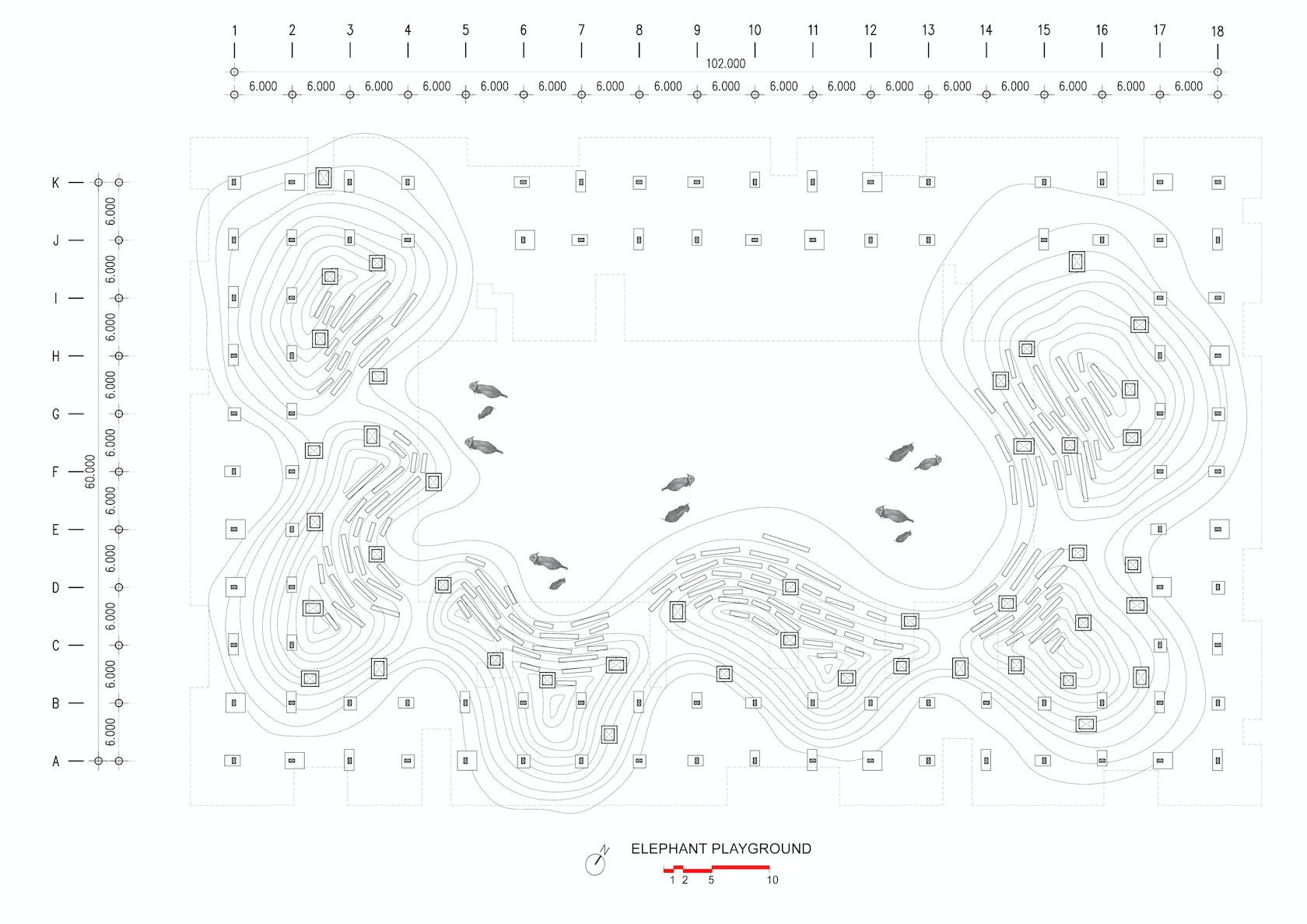 Text description provided by the architects. Casa Ocre is a two-story residence situated in the heart of Mexico City that combines modern elements with...

Text description provided by the architects. The most warmhearted temporary building in 2020. In October 2020, in the very autumn when the post-epidemic pain...