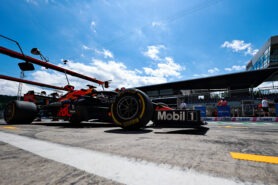 In the third practice for the 2021 Styrian F1 Grand Prix not much happened until 20 minutes had passed. In the first 20 minutes only 8 drivers had set a lap time. Up till then surprisingly George Russell had set the fastest lap time in the Williams on medium tyres. The British driver lapped the Red Bull Ring in 1:06.454. Fernando Alonso was 2nd on +0.232s.

With 20 minutes to go Max Verstappen was quickest again. His fastest lap time on soft tyres was 1:09.971. Lewis Hamilton was 2nd in the Mercedes also on soft tyres +0.396s slower and Pierre Gasly with soft tyres on 3rd place in the AlphaTauri on +0.719s on Verstappen.

Hamilton’s teammate Valtteri Bottas was 4th on +0.727s also on softs and Verstappen’s teammate Sergio Perez was 5th on +0.823s but drove that lap time on the mediums.

Hamilton was showed the fight is on and drove the quickest lap in the end beating Verstappen by 0.204s. Bottas who was 3rd quickest also could keep the Red Bull of Perez 0.2s behind him.