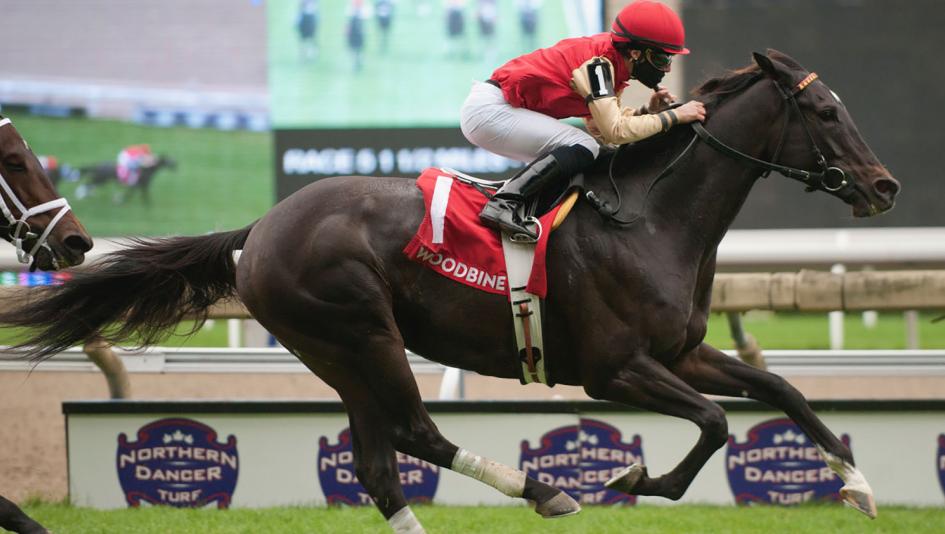 The $200,000, Grade 2  Elkhorn Stakes this Saturday is one of two marathon mile and a half graded stakes during the Keeneland spring meeting. This race is for males and the Bewitch Stakes next week is for females. 10 horses are entered the Elkhorn, and most have top credentials in similar races.

In terms of career earnings, the field is led by Channel Cat, winner of over $950,000 in his career in similar races. However, the now 6-year old is returning from three months off and hasn’t won since taking the Grade 2 Bowling Green Stakes in August of 2019. Similarly, Cross Border has earned in excess of three-quarters of a million dollars but hasn’t won since last July when victorious in the Lubash Stakes. Next, there’s 2019 Elkhorn Stakes runner-up Red Knight, who also captured the similar Grade 3 Sycamore Stakes at Keeneland last fall and is returning from a five-month layoff.

Say the Word has run much more recently than Channel Cat and Red Knight as he was beaten less than one length when second in the Grade 3 San Luis Rey Stakes in March. Another horse worth noting is Tide of the Sea, who won the Grade 2 William L. McKnight Stakes in January before a runner-up effort in the Grade 2 Mac Diarmida Stakes in February. North Dakota proved capable against similar horses when capturing the Grade 3 Red Smith Stakes last November. A newcomer to marathon stakes on turf is Monarchs Glen, a recent acquisition by trainer Mike Maker, who saddled the winner of the Elkhorn in 2016, 2019 and last year. Fantasioso makes his U.S. debut after importing from his native Argentina, where he won five of 23 races and was second in six others. Epic Bromance is trying stakes competition for the first time off a wire-to-wire win at 1 3/8 miles last month. Crafty Daddy rounds out the field, having returned from four months off at the end of March to finish third in the Kentucky Cup Classic Stakes. He has never run farther than a mile and one-eighth, whereas most of the others are proven at this distance.

Trainer Mike Maker has become well-known the past few years for winning these kinds of long turf races, and his record at Keeneland particularly bears that out. A STATS Race Lens query looking at Maker’s record on turf at Keeneland reveals he has saddled three of the last six winners of the Elkhorn Stakes, as well as one of the winners in the fall equivalent of this race, the Sycamore Stakes.

Maker has three entrants in this race in the form of Cross Border, Monarchs Glen and Tide of the Sea, and of the trio I fancy Monarchs Glen more than the other two, particularly as I suspect he will go to post at the highest odds of the three. Monarchs Glen won five of 11 races in the U.K. and Dubai before importing to the U.S. in the spring of 2019. He was so well regarded in Europe that in his final star in the fall of 2018, he ran in the Group 1 Qipco Champion Stakes against Cracksman and Crystal Ocean. Since then, he’s won just one of 12 U.S. starts before being entered into a $75,000 claiming race this January. Claimed out of a third-place effort in that race, Monarchs Glen finished ninth and fourth before being claimed once more, this time by Mike Maker. The fact that the horse was claimed for $62,500 out of his most recent start and can earn the winner’s share of $120,000 may be incentive enough to think Maker capable of winning this race again. Even more convincing is the fact that the 2019 Sycamore winner Marzo was a recent claim before the victory by Maker. Many other stakes winners trained by Maker were acquisitions where he saw something other trainers had missed, and this history makes me believe Monarchs Glen can run well although he’s never raced this far. He’s by champion Frankel and out of a Lear Fan mare, which makes me believe that he can handle this mile-and-a-half trip. Additionally, the 110 Equibase Speed Figure he earned winning last November matches the figures of horses already proven at the level such as Say the Word (111) and Red Knight (115), so he may only need to repeat his best effort to post the upset win.

Say the Word won the Northern Dancer Stakes at this 1 1/2-mile turf trip last November, certainly the biggest win of his career to that point. Three races later and after moving to the barn of trainer Phil D’Amato in California, Say the Word once again ran a big race, missing by three-quarters of a length to multiple grade stakes winner United in the San Luis Rey Stakes. With the meet’s leading jockey in Luis Saez getting on and touting a career-best 111 Equibase Figure from his most recent race to repeat or improve upon, it would be no surprise if Say the Word was right in the thick of the action at the finish.

Red Knight fits perfectly here with one small exception and that is he hasn’t raced since November. On the other hand, Red Knight finished second of 10 last September in the Kentucky Turf Cup following more than seven months off. Following that effort, Red Knight won the Sycamore Stakes at this distance on the Keeneland turf, earning a very strong 114 figure which would make him competitive here if repeated. Jockey James Graham rode Red Knight in the Sycamore but not before or since, and gets back on for the Elkhorn, so that is a positive sign as well.

Honorable mention goes to Tide of the Sea, another horse trained by Mike Maker. Likely to be the early pacesetter, Tide of the Sea used his early speed to win the William L. McKnight Stakes at Gulfstream Park in wire-to-wire fashion in January. However, not only did that effort yield at 104 figure about seven to 10 points lower than the main contenders above, Epic Bromance is another horse in this field who appears to be a need-the-lead type, so I think Tide of the Sea may not get the easy lead he needs to win. Nevertheless, he could be a part of the exacta and finish second at the very least, just as he’s done in four of 11 lifetime races.

This column highlights the performances of maidens who have made no more than five starts and who either sold for more than $500,000...