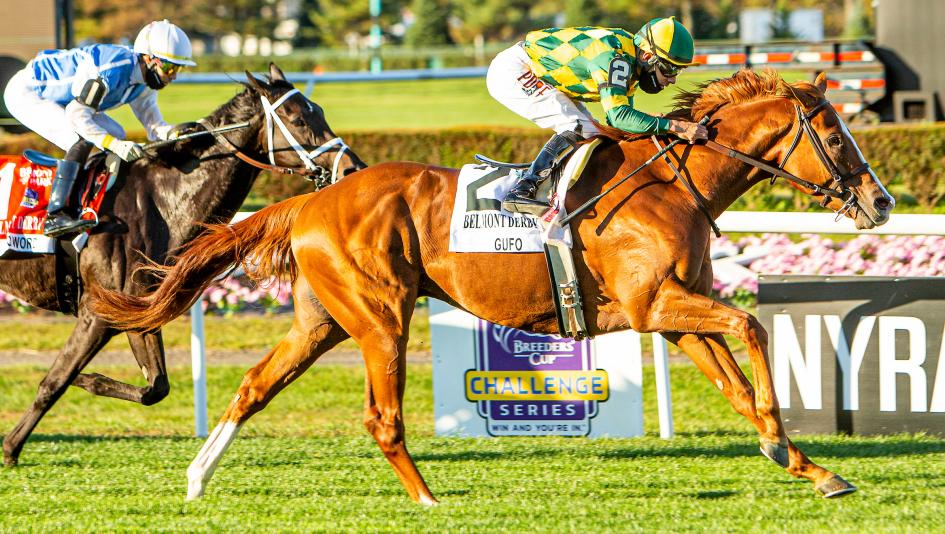 The $700,000, Grade 1 Man o’ War Stakes Saturday at Belmont Park drew a field of eight top-level marathon turf runners to compete at 1 3/8 miles, with seven having proven competitive at this level in races around North America. Then there’s Sovereign, who makes his North American debut and returns to the races after last competing in November. Sovereign has earned over $1.15 million in his career, tops in this field, the bulk of that from his Group 1 Irish Derby victory in the summer of 2019. Next in terms of earnings is Channel Cat with over $998,000, who won the Grade 2 Bowling Green Stakes in the summer of 2019 and who finished second in the Grade 2 Elkhorn Stakes in his most recent race.

Another horse which earned a big win in 2019 but not since is Ziyad, who was victorious in the Group 1 Grand Prix de Deauville in August of that year. He makes his third start in the U.S. since importing last fall and has two third-place efforts in his first two races. Gufo won the Grade 1 Belmont Derby Invitational over this course last fall and just missed when third in the Grade 1 Hollywood Derby before taking time off, returning to make his 2021 debut in this race. Moon Over Miami won the Dueling Grounds Derby at Kentucky Downs last September, a race which doesn’t yet carry a graded designation but did offer a $700,000 purse similar the Man o’ War’s. Field Pass won the Grade 3 Ontario Derby and the Grade 3 Kentucky Utilities Transylvania Stakes last year and makes his second start of 2021 following a fourth-place effort in the Grade 1 Maker’s Mark Mile. Shamrocket has two wins in 13 career races, neither in a stakes race, although he was third in the Dueling Grounds Derby last summer. So High rounds out the field and is running in a stakes race for the first time while still eligible for allowance races.

Gufo returns to racing following five months off, but that should be no concern when coming back in a turf marathon like the Man o’ War Stakes. Gufo won the second through fifth starts of his career starting in December 2019 through July of last year ending with the Kent Stakes at Delaware Park, and then just missed by a head in the $500,000 Saratoga Derby Invitational in August. Next, in his first and only start on the Belmont Park turf, Gufo won the Belmont Derby in October with a 104 Equibase Speed Figure which was very strong for a 3-year-old. In his final race of the year, the Hollywood Derby at Del Mar, Gufo was exceptionally game when rallying from last of 11 to be in a three-horse photo on the wire, losing by a head and a neck with a 107 figure. The horses which beat him that day, Domestic Spending and Smooth Like Strait, are near the top of the turf division in North America having just finished first (in a dead heat) and third last weekend in the Old Forester Bourbon Turf Classic Stakes. Now a more physically mature 4-year-old, Gufo should run even better than he did last year and that makes him the one to beat in this year’s Man o’ War Stakes.

Field Pass is also a 4-year-old and has a similar pattern to Gufo which suggests he could run a big race in this situation. Last summer, Field Pass proved his stakes quality when winning the Audubon Stakes and Transylvania Stakes in succession. In October, Field Pass earned a career-best figures of 109 when third in the Twilight Derby won by Smooth Like Strait (who, as noted above, finished third in the Turf Classic last weekend). After winning the Ontario Derby on all-weather surface at Woodbine in November with a new career-best 110 figure, Field Pass finished fourth in the Mathis Brothers Mile Stakes (also won by Smooth like Strait) before resting to begin his 2021 campaign. In his comeback race last month, Field Pass was not disgraced when finishing fourth of nine in the Maker’s Mark Mile. He appears very well spotted to improve considerably in his second start of the year and should be a factor in this race. Although he’s never run this far, as a son of Lemon Drop Kid he should have no problem successfully handling the distance because a STATS Race Lens query reveals the sire has produced four top graded stakes winners at similar distances.

Sovereign has been working steadily in Florida and New York for his U. S. debut. He is now in the barn of top trainer Chad Brown, who has a very strong knack with having his horses coming back from layoffs and making their U.S. debuts in top shape. A STATS Race Lens query reveals over the last five years, Brown has won with six of 22 (27%) similar starters in graded stakes. Sovereign earned the biggest win of his career when winning the Irish Derby in 2019 easily by six lengths. Since then, Sovereign has finished second or third in three of his five starts. One of those was when second to the incomparable mare Enable in the King George VI and Queen Elizabeth Stakes last summer at Ascot, an effort which earned a 117 figure good enough to win the Man o’ War if repeated.

Honorable mention has to go to Ziyad, who earned a 111 figure last October in his U.S. debut when third and beaten just two lengths in the Sycamore Stakes. Similarly, Channel Cat earned a 115 figure last month when second in the 1 ½-mile Elkhorn Stakes. As such, I wouldn’t argue with anyone who considered them contenders to win this race. Also, Moon Over Miami earned a decent 109 figure when second in the Pan American Stakes Presented by Rood and Riddle at a 1 ½ miles at the end of March and may fit as a contender as well. I don’t feel the same way about Shamrocket, who although earning a 109 figure at the end of March did so at 1 1/8 miles and in a non-graded stakes and appears a bit overmatched against this group. So High is definitely overmatched in this field as he is still eligible for the first allowance condition and was running in a claiming level race as recently as December.

Silver Dust Can Spring the Upset in Stephen Foster Stakes

The $600,000, Grade 2 Stephen Foster Stakes Saturday at Churchill Downs brings together a field of nine horses in the Longines Breeders’ Cup...