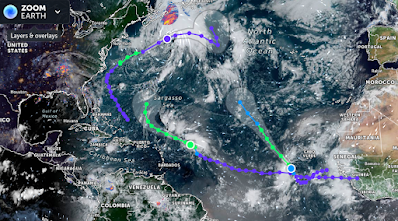 Odette is not being followed any longer.

Upgraded late and out of date now!

It’s been a busy evening in the tropics over night as the NHC made a lot of decisions everyone was waiting for a while now.  Odette was dropped and Peter picked up! Using this good map from Zoom Earth that shows all three and their various current tracks. I say “current” as they are far out and there’s always time for some minor changes as weather happens in real time and often throws you a curve ball. Peter could throw us a curve ball, though most have written him off as fried fish. Not that fish is bad mind you, you just have to be in the mood for fish. Some people don’t like fish, that always confuses me but I’m more of a meat and potatoes girl myself though fish is good also. I’m always open to options.

That brings us back to Peter, are there really options or is his track set in stone? Not sure I like how that sounded, let’s say – – – will detours arise and if so for how long?

As for 17 she seems destined to party too hard too fast and burn herself out. 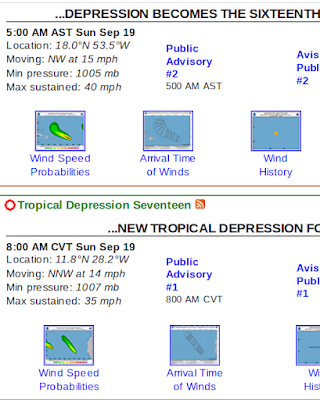 There’s the official track from the NHC.

Northern component in both systems. 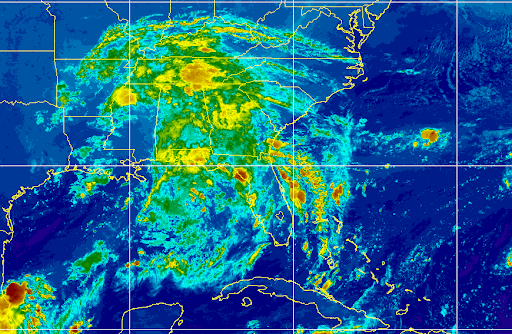 Elsewhere there’s a lot of moisture in the GOM.

Also in the SE.

Remnants of Nicholas and whatever. 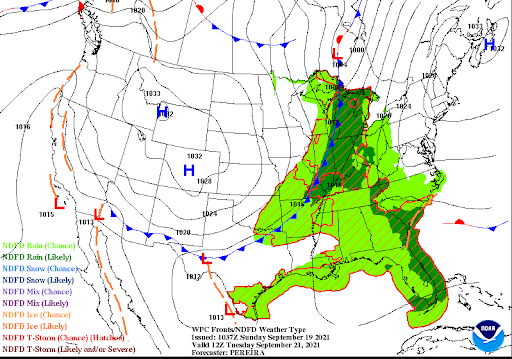 There’s a cold front on the way!

Kind of like the calvary in an old movie!

So if what does worry me? 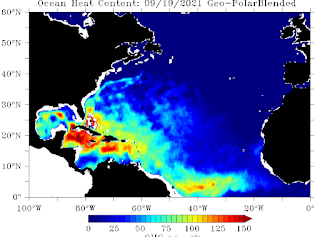 So I am not saying the Atlantic, the distant Atlantic  known as the MDR is dead or becoming irrelevant, but I am saying this has been an odd Hurricane Season.  We had a cold May after apple trees blossomed in the SE and then lost most of the apple crop (according to local farmers) and a misplaced summer and Fall has been also odd. The timing has been off. Waves came alive early on before SAL took over and ran amok and now during the “height of the Hurricane Season” the CV storms are in a rush to swim out into the Atlantic and chase each other like they are playing follow the leader after Larry busted a path through the High Pressure. Really everyone owes Larry a huge debt of gratitude, otherwise this month would be a different story.

And where the water and energy strongest? In the Caribbean, in an area that is becoming climatologically favorable too soon and we have fronts on the move. When a hurricane is approaching from the direction of wayward Peter than they grab him and make a run for it, they take a long road trip in a boat not a car. But, if a hurricane forms down in the Caribbean and a cold front appears that cold front reaches down and whispers sweet nothings into the hurricanes ear, stares into it’s eye and says “come play with me” and when that happens you get a Wilma or a Sandy type situation and dare I even add in Hazel and Matthew. Google those storm tracks and think about what I said just now.

Trying to keep it simple and real this morning, without going too long. If you know me, you know what I’m saying and realistically anyone who knows anything about hurricane history knows what I mean. If you really need a visual then look at the track of the 1921 Tampa Hurricane in October and you will see what I mean. And the water is hot enough down there (see graphic above) for it to be really mean, intense and trouble be it in River City or the East Coast or both!

Ps Song for Peter and his friend behind him……

The song I couldn’t remember that I really shouldn’t forget. I think it sounds too much like that the Wings song I like also and it gets confusing. I need more better coffee…that’s what we say “Down South” but perhaps I really need a cortadito. Oh well… check back later for more breaking news in the tropics today!