Greetings to everyone!
Please be aware, even though I do not post every night, rest assured I am continuously monitoring various areas for any significant weather.  I will be taking Sundays off (family time), unless we have active systems that may be posing a threat (i.e. Tropical, Winter Weather, Coastal Storms, etc.).

As a storm becomes named, I will be marking it in bold red to keep track of the activity for this Atlantic season.  Beginning this season, the WMO has decided to no longer use the Greek alphabet, and came up with an alternate list of names, should we go past the names above.  The list of names are as follows: 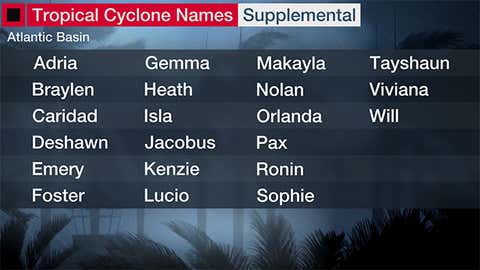 Analysis of the global models this evening, did not indciate any tropical cyclone development over the next 5 – 7 days.  However, we could be coming into a period where conditions may become a little more favorable for an increase in convective activity.  Analysis of the MJO forecast / CHI 200 forecast maps indicate we could begin to see some upward vertical velocities (rising motion) at the 200 mb level by the first week of June.  Based on the analysis of the motion I have been seeing, I wouldn’t look for anything during the beginning of the first week of June, but more toward the end of the week, and into the second week.  The various modeling indicates upward motion (green and blue areas) heading eastward into the GOMEX and Caribbean basins, along with a portion of the extreme western Atlantic.  The ECMWF EPS 6 – 10 DAY, and 11 – 15 day mean indicates a favorable signal.  The GFS shows the MJO entering the GOMEX and Caribbean during the first week of June.
ECMWF EPS 6  – 10 DAY MEAN VELOCITY POTENTIAL

The Japanese Meteorological Association (JMA) model indicates the best shot during week 3 and 4 from the 19th of this month, which would indicate the start from June 05 – June 18.  This model was dead on accurate last hurricane season, ti which I utilized it extensively  to forecast probable development.
JMA

Upward motion at the 200 mb level creates (divergence), or spreading out of air radially in the upper atmosphere.  This, in turn, helps create “convergence” at the seas surface.  As the air “evacuates” in the upper level, air comes together at the seas surface.  This is how we get areas of convection and building thunderstorms, provided other conditions are favorable, hence the building blocks for tropical development.

As all of you probably know by now, we had our first “Tropical Storm” for the year.  However, having analyzed various items in my arsenal, I personally would not have named ANA, and feel we had another system in which it should not have been named…maybe subtropical at best.  This is one reason why, we wound up with 30 named systems last season. I saw some “ridiculous” things last year, one of which was the naming of “naked” swirls.  In any event, I wish to point out some items noted in my analysis of the system while it was active (although I did not forecast on it), of what I feel should have precluded naming, or at least why I feel it shouldn’t have been said to transition to “tropical”:

1.) At the time ANA was designated as a sub-tropical storm, there was only one problem…the 11:00 a.m. advisory declared it was subtropical.  However, the NHC/NOAA 18Z (2:00 p.m.) surface analysis map, indicated a front was attached to the low:

By definition:
Subtropical Cyclone:
A non-frontal low-pressure system that has characteristics of both tropical and extratropical cyclones. Like tropical cyclones, they are non-frontal, synoptic-scale cyclones that originate over tropical or subtropical waters, and have a closed surface wind circulation about a well-defined center. In addition, they have organized moderate to deep convection, but lack a central dense overcast. Unlike tropical cyclones, subtropical cyclones derive a significant proportion of their energy from baroclinic sources, and are generally cold-core in the upper troposphere, often being associated with an upper-level low or trough. In comparison to tropical cyclones, these systems generally have a radius of maximum winds occurring relatively far from the center (usually greater than 60 n mi), and generally have a less symmetric wind field and distribution of convection.

2.) SST’s were only 20 – 21 deg.C in the area where development occurred.  While a cyclone CAN develop with those SST’s, due to the colder air temperature surrounding it, the threshold for a sub-tropical system is 23 deg.C

3.) Once the system had shed the front, and convection flared up for a short time, it was said to have transitioned to tropical.  Again, a cyclone can form with cooler SST’s, depending on the temperature of the surrounding environment.  The threshold for a purely tropical system is 26.5 deg.C.  The surround water was 19 – 20 deg.C

4.)  The storm was surrounded by dry air, and was most likely entraining it.  Analysis of precipitable water imagery indicated the PWAT values were very low (indicating a dry environment).  PWAT values were only noted to be between 30 – 35 mm, which is pretty dry compared to what I usually analyze in the tropical storm or hurricane (60 – 70 mm).

6.) Analysis of AMSU data during the time of ANA, indicated here core never became fully warm.  One of the data set indicated the core was warm close to the surface, but was cold from about 700 mb up to 300 mb.  The remainder pretty much indicated a cold core cyclone.  For a cyclone to be “tropical”, it has to have a “warm core”
AMSU DATA (MAY NOT BE IN ORDER).  RED VERTICAL LINE DEPICTS TC APPROXIMATE LOCATION

Tropical Cyclone by definition:
Tropical Cyclone:
A warm-core non-frontal synoptic-scale cyclone, originating over tropical or subtropical waters, with organized deep convection and a closed surface wind circulation about a well-defined center. Once formed, a tropical cyclone is maintained by the extraction of heat energy from the ocean at high temperature and heat export at the low temperatures of the upper troposphere. In this they differ from extratropical cyclones, which derive their energy from horizontal temperature contrasts in the atmosphere (baroclinic effects).

Albeit convection did increase for a breif period, refer to the definition above.

Based on the items I have listed, I have to conclude the environment was more of a baroclinic setup, and strengthening was a result of baroclinic forcing (i.e. shear, upper trof versus upper level outflow, temperature gradients), and ANA did not become “tropical”.  Tropical systems derive their energy from a barotropic environment.

Have a blessed evening!

My issue with this system is this.....you cannot look simply at the Cone.Weather is far from the center and NHC has said that.The...