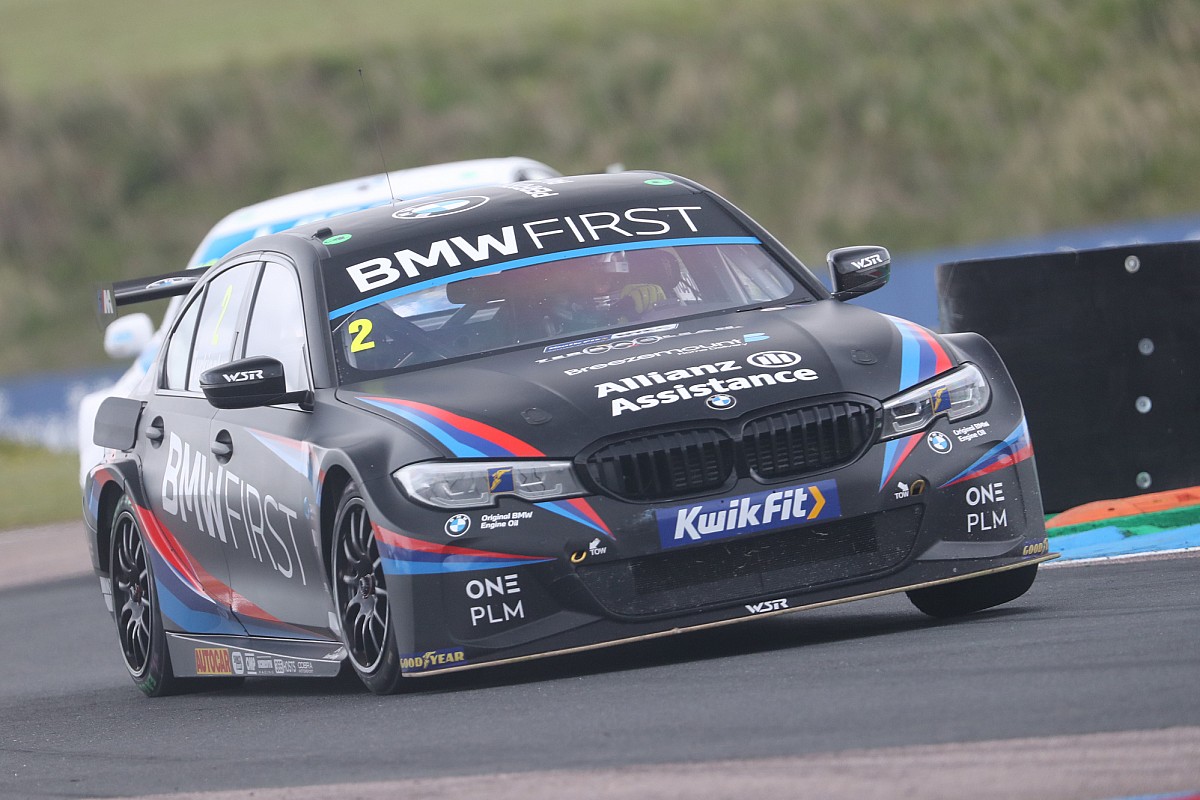 Turkington was attempting to defend second place from Josh Cook into the Complex on the first lap when his West Surrey Racing-run BMW 330i M Sport tapped the rear of Sutton’s Laser Tools Racing Infiniti Q50, dropping the reigning and two-time title winner to the tail of the field.

Sutton stormed back to finish 10th, while Turkington claimed fourth on the road but was penalised 17 seconds after the race – enough to drop him behind Sutton, who moved up to ninth.

“In the end it was an error of judgement on my part,” Turkington told Motorsport.com.

“Josh hung around the outside and I was trying not to let him, and we were tracking in with a bit more speed than Ash. By the time I realised, I was into the back of Ash.

“I’ve been on the receiving end of that kind of thing many times, and had it [the Infiniti] been front-wheel drive he’d have been up and gone.”

Sutton said: “I didn’t even see it coming. I looked in the mirror, saw he was two car lengths behind, no need to defend. Then there was contact and I was just a passenger.”

Turkington needed attention to a back problem on Saturday evening, and had been in great pain while qualifying third.

“I was really suffering, in so much pain,” he added. “I was thankful I only had to do one lap at a time in qualifying.

“I got to see a chiropractor, and with a bit of treatment and medication I got it under control.

“I was pleased to be able to do all the races and get three top tens, when I could barely do a lap the day before.

“Now I’m happy that I can go home and have a bit of rehab for a week or so.”

Turkington was seventh in race two, and ran second on wet-weather tyres in the damp finale before slithering down to sixth when the rain arrived again.

“It didn’t rain enough really,” he said. “In the beginning it was only damp, and I was trying to protect the rear tyres, but they just got a bit hot and I spent more time sliding each lap.

“Even when the rain came, they were too far gone to get the grip back.”

Turkington wasn’t the only driver to take a hit from the stewards over the weekend.

Neate initially reported a suspected sticking throttle, but the verdict was “driving in a manner incompatible with general safety or departing from the standard of a reasonably competent driver, as there is no evidence of mechanical failure with the car from the data that was obtained after the race”.

Tom Ingram was issued with a formal written reprimand and given two penalty points from an incident in the same race.

Ingram, who had finished second in the opening race in his Excelr8 Motorsport Hyundai i30 N, forced the Ciceley Motorsport BMW of Adam Morgan off the circuit on the run to the chicane, which meant Morgan had to visit the pits to have grass removed from the radiators.

Coronavirus latest: Eye and cancer surgery hit most by pandemic delays in England