The UK and Australia have agreed the broad terms of a free trade deal that is expected to become a model for Britain’s post-Brexit commercial policy.

Prime ministers Boris Johnson and Scott Morrison are set to announce the in-principle agreement on Tuesday despite concerns raised by farmers in both countries over elements of the deal.

British farmers fear concessions allowing tariff-free, quota-free imports of Australian beef, lamb and sugar would seriously damage the domestic agriculture sector. They are also worried about welfare standards in Australia, including the use of hormones by some beef producers.

In Australia, meanwhile, farmers have warned that proposals to exempt British backpackers from having to do farm work when renewing their visas would exacerbate labour shortages, blighting the sector.

Johnson and Morrison negotiated the broad terms of the agreement over dinner in Downing Street on Monday night, enabling a formal announcement to go ahead, officials told the Financial Times.

“Both prime ministers have held a positive meeting in London overnight and have resolved outstanding issues in relation to the FTA,” a spokesman for Dan Tehan, Australia’s trade minister, said on Tuesday.

“Their agreement is a win for jobs, businesses [and] free trade and highlights what two liberal democracies can achieve while working together.” 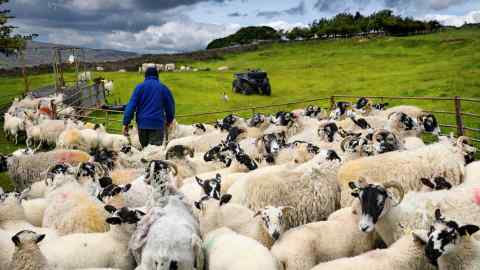 If the trade deal can be signed before the end of the year, it would mark the first big bilateral agreement entirely negotiated by the UK since it left the EU in January 2020. Deals announced with Japan and Norway were built upon existing arrangements that were negotiated while the UK was a member of the EU.

Mark Melatos, associate professor at University of Sydney, said the Australia agreement was significant for the UK, but a double-edged sword.

“On the one hand, it shows that the UK can conclude bilateral trade agreements post-Brexit, albeit with a very close friend, Australia. This is important for political optics,” he said.

“On the other hand, this deal sets a precedent for later, likely more complicated, deals the UK negotiates. Any concessions granted now to Australia will form a baseline for the start of future negotiations with the US, EU etc.”

Australian Agricultural Company, the country’s biggest beef exporter, has predicted a tenfold rise in beef exports to the UK if the zero-tariff deal was agreed.

But Australian farmers have raised objections about a British demand to remove a requirement that UK backpackers work at least 88 days on farms to extend working holiday visas.

David Littleproud, Australia’s agriculture minister, said on Tuesday that Canberra would introduce mechanisms to replace the roughly 10,000 British backpackers who work in Australia’s farm sector with alternative labour if required under the trade deal.

The government has estimated that a free trade deal with Australia would be worth an additional 0.01-0.02 per cent of gross domestic product over 15 years, or £200m-£500m more than 2018 levels.

The FT has revamped Trade Secrets, its must-read daily briefing on the changing face of international trade and globalisation.

Sign up here to understand which countries, companies and technologies are shaping the new global economy.