The US has launched air strikes on facilities of two Iran-backed militia groups on the border between Syria and Iraq, just over a week after the landslide election victory of hardliner Ebrahim Raisi as Iranian president.

John Kirby, Pentagon press secretary, said operational and weapons storage facilities had been targeted in Syria and Iraq which were being used to launch drone strikes against US troops and facilities.

Kirby said the air strikes were “defensive” and a response to an “ongoing series of attacks by Iran-backed groups targeting US interests in Iraq”. He added that they were being used by several Iran-backed militias including Kata’ib Hezbollah and Kata’ib Sayyid al-Shuhada.

“The United States took necessary, appropriate, and deliberate action designed to limit the risk of escalation — but also to send a clear and unambiguous deterrent message,” Kirby said.

The strikes marked the second time President Joe Biden has ordered the use of force in the region, after the US carried out air strikes against Iran-backed militias in Syria in late February.

The military action followed the election of Raisi, a conservative cleric and judiciary chief, which gave regime hardliners control of all branches of the Iranian state for the first time in almost a decade. 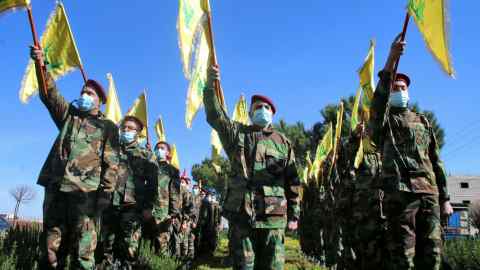 The Biden administration is seeking to re-enter the 2015 nuclear pact with Iran and has embarked on several rounds of indirect negotiations in Vienna. The talks have yet to deliver a breakthrough.

Tehran has repeatedly demanded that Washington lift sanctions before it would agree to curb its nuclear programme. Since the Trump administration withdrew from the deal, Iran has violated limits on its nuclear production, causing concerns at the UN’s nuclear watchdog.

Biden has promised to rejoin the nuclear agreement if Tehran returns to full compliance. But his administration is under pressure from US politicians, Israel and Washington’s Arab partners to take a tough line on Iran’s support for regional militias and its missile programme.

Nancy Pelosi, Speaker of the House of Representatives, said “protecting the military heroes who defend our freedoms is a sacred priority”.

She added: “Congress looks forward to receiving and reviewing the formal notification of this operation under the War Powers Act and to receiving additional briefings from the administration.”