US tax authorities have launched an investigation into a leak of private records of billionaires including Warren Buffett, Jeff Bezos, Mike Bloomberg and Elon Musk that showed many of them have paid little tax even as their wealth ballooned.

ProPublica published details of what it called “a vast trove of Internal Revenue Service data” covering more than 15 years of tax returns from thousands of the wealthiest Americans. The non-profit investigative journalism outlet did not disclose the source of the leak.

Its report concluded that legal tax-avoidance strategies had allowed the 25 richest Americans to pay just $13.6bn in federal income taxes in the five years to 2018, even as the rising value of their stocks, properties and other assets had inflated their collective wealth by an estimated $401bn.

Charles Rettig, the IRS commissioner, told a Senate finance committee hearing that the agency had opened an investigation to uncover the source of the leak. He said he shared “the concerns of every American” that sensitive confidential information had been disclosed.

Jen Psaki, the White House press secretary, said “any unauthorised disclosure of confidential government information by a person with access” was “illegal” and taken “very seriously”. She pointed to the IRS’s referral of the leak to the Treasury department’s inspector general for tax administration, the FBI, and the US attorney’s office for the District of Columbia.

However, Psaki also said the leak highlighted that “there is more to be done to ensure that corporations and individuals” were paying “more of their fair share” in taxes as proposed by President Joe Biden.

The country’s wealthiest, who profited immensely during the pandemic, have not been paying their fair share

Bloomberg, the former New York mayor and US presidential candidate, pledged to use “all legal means” to uncover the source of the leak. The founder of the eponymous financial information group pushed back at the article’s premise, saying that he “scrupulously obeys the letter and spirit of the law” and distributes about three-quarters of his annual income in taxes and charitable giving.

“The release of a private citizen’s tax returns should raise real privacy concerns regardless of political affiliation or views on tax policy,” he said in a statement. “We intend to use all legal means at our disposal to determine which individual or government entity leaked these and ensure that they are held responsible.”

The leak comes as some Democrats are advocating a tax on the richest Americans’ total wealth, rather than focusing on annual incomes which can be offset by deductions, borrowing and investment losses.

Elizabeth Warren, the US senator from Massachusetts, introduced legislation this spring to apply a 2 per cent tax on individuals with a net worth above $50m, with a further 1 per cent surcharge imposed on any wealth above $1bn. President Joe Biden has proposed increases in the tax rate on capital gains and dividends for those earning more than $1m but has not backed the wealth tax.

Warren seized on the ProPublica report, writing on Twitter that it showed that it was time “to make the ultra-rich finally pay their fair share”.

Morris Pearl, chair of a group of wealthy campaigners for higher taxes on the rich called the Patriotic Millionaires, said the report bolstered its argument that the very richest Americans “can basically choose whether to pay taxes or not”.

The wealth taxes and higher taxes on unrealised capital gains for which his group advocated were “fringe ideas” when it launched in 2010, he said, but sentiment had shifted and ProPublica’s disclosures could boost support further. 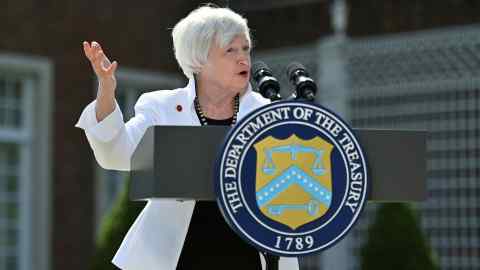 Bloomberg and Buffett have been among the billionaires calling for higher taxes on the wealthiest Americans for several years, but the economic divides exposed by the pandemic have raised the political stakes.

ProPublica said it had decided to reveal the details “because it is only by seeing specifics that the public can understand the realities of the country’s tax system”.

Ron Wyden, a Democrat from Oregon who chairs the Senate finance committee, said ProPublica’s report had shown that “the country’s wealthiest, who profited immensely during the pandemic, have not been paying their fair share”.

Rana Foroohar and Edward Luce discuss the biggest themes at the intersection of money and power in US politics every Monday and Friday. Sign up for the newsletter here