The US Supreme Court will take up a big abortion case challenging Roe vs Wade, a move that stands to reignite long-simmering tensions over abortion rights in America.

The court said on Monday it would review whether prohibitions on abortions early in the pregnancy are unconstitutional, in a case involving a Mississippi state law that bans abortions after 15 weeks. The Roe vs Wade decision, first handed down in 1973, enshrined a constitutional right to abortion.

The Supreme Court is likely to hear the case this autumn, with a ruling made in the spring or summer of 2022 — just before midterm elections next November.

It will be the first big abortion case to be considered by the highest US court since conservative Amy Coney Barrett joined the bench last year, following the death of liberal Ruth Bader Ginsburg.

With Barrett’s confirmation, the nine-member Supreme Court is balanced, 6-3, in favour of justices appointed by Republican presidents.

Barrett’s nomination by Donald Trump last year and Senate confirmation just days before November’s presidential election was cheered by religious conservatives and opposed by progressives. Barrett is a practising Catholic and mother of seven children who has long been celebrated by self-described “pro-life”, or anti-abortion, campaigners.

Last summer, when Ginsburg was still on the bench, the Supreme Court narrowly struck down a restrictive abortion law in Louisiana, after chief justice John Roberts sided with the court’s liberal wing.

Abortion has long been a lightning rod issue in US politics, though public opinion has remained remarkably consistent in the decades since the Roe decision. 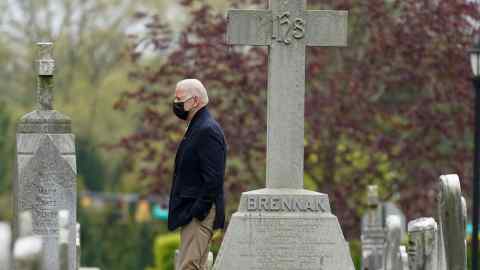 But Republican and Democratic lawmakers have hardened their positions on the issue in recent years, with many conservatives pushing for the Roe decision to be overturned, and many progressives advocating for fewer abortion restrictions.

Joe Biden, the US president, who is also a practising Catholic, in 2019 dropped his longstanding support for the Hyde amendment, which bans the use of federal funding for abortion services. The White House did not immediately comment on the Supreme Court’s move on Monday.

A big abortion decision next year could colour the run-up to the 2022 midterms, when Republicans will try to take back control of the House of Representatives and the US Senate. Abortion rights has long been a mobilising issue for conservative voters, but has energised progressives as well in recent years.

Israel’s parliament is poised to vote in a new government later on Sunday, ending Prime Minister Benjamin Netanyahu’s 12-year grip on power after...

How wild, reckless spending sent this country’s first and last sports daily to an early grave — from someone who was there