Unpacking a grimy duffel bag grimy from three weeks up on Denali, Vasu Sojitra wonders jokingly if his mentor, pioneering alpinist Conrad Anker, will be pissed that Sojitra broke half of the gear he was lent. An expedition on Denali, even a successful one, will do that. And Sojitra’s was successful. He, along with another adaptive athlete Pete McAfee, partners Stein Retzlaff and Erich Roepke, and photographer/videographer Ted Hesser tagged the summit despite harrowing conditions, successfully skiing the first disabled descent of North America’s highest peak. In the end, Sojitra’s thoughts faded: A few broken stoves weren’t a huge price to pay for such an achievement. They plan on assembling a documentary short with their footage.

Sojitra lost his right leg to a blood infection at nine-months-old, but grew up learning to ski in Connecticut with his brother and the aid of his metal “ninja sticks.” He moved west after college and discovered ski mountaineering. Since then he’s put together an impressive list of accomplishments that range from a slew of First Disabled Descents in the Beartooth and Bridger ranges to landing 720s and being the first adaptive athlete signed to The North Face. We caught up with Sojitra over the phone while he reflected on the recent achievement at his home in Bozeman.

Let’s dive right into your trip to Denali. How did this expedition come to life?

So, Denali wasn’t actually my idea. It came from Pete McAfee, the other adaptive athlete on the team, and Erich Roepka. Erich and Stein Retzlaff, another ski mountaineer, were doing what they called the Ring of Fire tour. They connected with Pete to ski Mount Shasta and while they were chatting on the skin track about Denali, and Pete decided he wanted to ski it. A mutual friend of ours ran into me in the liftline here in Bozeman and shouted, “Hey! Wanna ski Denali?” He shared that it was a plan with another adaptive athlete, and I was sold. The dream of skiing Denali bounced around my brain for years before but, you know, there aren’t many of us who are doing this stuff, so I was stoked to do it with Pete.

I had a lot of apprehension because the way I travel [in the mountains] is much slower and more physically taxing than most; it’s basically doing dips the entire time. I didn’t know anyone on the team before agreeing to join the team. So, we decided to suss out our team dynamics by attempting Mt. Rainier. We ended up turning around at 12,000 feet due to heat and wet slides, but we skied the Fuhrer Finger together—also a First Disabled Descent. It was a rugged few days but we worked really well together as a team, so we decided to go for Denali.

What route did you take up (and down) Denali?

Our ideal scenario was to ski the Messner Couloir, but the rangers and other athletes told us it was the lowest snow year in 20 years. So, we played it safe and went up and down the West Buttress, the standard route. The conditions were atrocious when we did it. Sun hit, wind scoured, ice. No real high-altitude skiing is deep powder turns.

Tell me about the group dynamic? How did you play off each other’s strengths?

There were six of us, all guys, and I was adamant about asking for support because pulling a sled is difficult for me, especially with two backpacks. I pulled it up to about 10,000 feet and then we decided to switch it up to conserve my energy for the upper mountain—the more difficult part—and I would hand off the sled to the physically stronger members of the team. They were totally okay with that, and were stoked to make it to the summit as a team. With the production gear, we were carrying way above average weight, so it was pretty difficult.

Did having a film crew with you add pressure to perform?

Definitely. I’m prioritizing my safety, but the pressure is there to perform as best as possible. On a mountain like Denali, which is trying to eat you alive, whether it’s cuts, bruises and infections or wind and storms, you have to cut through that and prioritize your safety.

What were the biggest challenges the team faced up there?

It’s all the little things that add up: the poor diet of high-fat foods, the altitude compounds making it hard to have an appetite when you really need to eat. We also had a lot of snow that slowed our upward progress. There were also tons of parties up there who were taking risks way beyond their abilities up there. With the objective of filming, these pressures mounted.

With all that said, how’d it feel to click into your ski on the summit?

Monumental. I was euphoric and felt fulfilled. Not just in myself but primarily with our team because it was a massive team effort. I would not be able to do that on my own—they were so supportive when it came to the heavy lifting up to 14,000 feet and beyond. It was a culmination of the massive team effort to get to the summit with the way that I move. The support and care for each other that we had was integral. It really felt like lifting as we climb.

What do First Disabled Descents mean to you, and why do you pursue that style of skiing?

I don’t mean to individualize myself—I think the outdoor industry is so individualistic and it takes away from the community aspect. The idea of showcasing these First Disabled Descent isn’t meant to idealize myself or Pete, or the athlete in question, but meant to prove that when given the proper resources, support and care we are able to do powerful things. That’s kind of the idea behind Diversity, Equity, and Inclusion that I try to teach: Everyone can find their own successes, their own Denali, as long as they’re provided the support.

A lot of people look at disability as this horrible thing that can happen to you. People still come up to me and tell me they feel sorry for me, and that they’re so grateful they have two legs. But the way I view disability is not as a bad thing. The barriers are the problems—whether they’re built through personal relationships or structural and systemic issues, through ableism and issues that face disabled populations deal. I focus on outdoor recreation and access. As long as we have humans, we’ll have disability. I want to focus on how we can lift everyone up.

What do you hope to do next after you sort through all your footage?

I’m looking to ski Mont Blanc, and maybe put together and ski a First Disabled Descent of Cho Oyo, an 8,000-meter peak in Nepal. The adaptive backcountry scene is expanding heavily, so it’s cool to be a part of that and put together a bigger team of adaptive athletes for these projects. 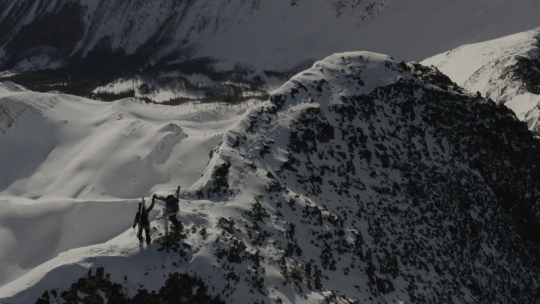 If A Snowmobile And An E-Bike Had A Baby

In 2021, it is fair to think all of our winter recreational needs have been met. We have skis, snowboards fat bikes, snowmobiles,...

The Old Honda Passport Was An Underrated Ski Bum Vehicle

It can be fun to marvel at the classic ski bum vehicles you might find in the parking lot at your favorite ski...

The best technology and innovation podcasts in Spanish