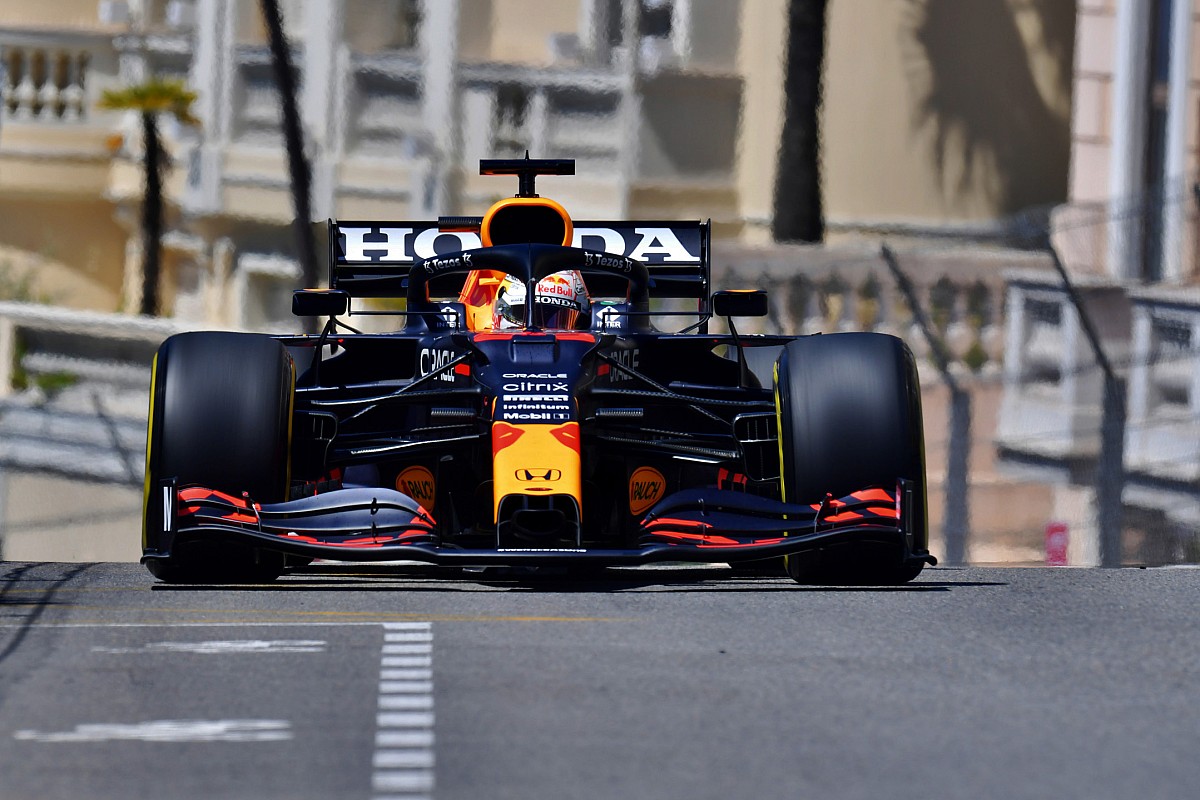 Mercedes pair Valtteri Bottas and Lewis Hamilton finished down in fourth and seventh in what was a subdued session from the world champion squad.

The two red flags followed Nicholas Latifi and Mick Schumacher crashing their Williams and Haas cars in separate incidents in the closing stages.

After overnight rain and with continuing cooler temperatures compared to the initial practice running on Thursday, the drivers were going ever faster throughout the one-hour session and as their respective runs progressed.

The key to a good laptime was working the tyres up to temperature in the lower temperatures and then keeping the tyres alive – as well as negotiate traffic smoothly – as a run of several flying laps progressed.

Kimi Raikkonen kicked the action off after no cars ventured out in the opening five minutes, setting the initial P1 benchmark at 1m24.437s, before he and teammate Antonio Giovinazzi quickly brought it down.

Raikkonen soon beat Giovinazzi’s opening effort of 1m16.087s and continued to improve during his early laps on the soft tyre to get down to a 1m13.432s.

While Mercedes and Red Bull kept their cars in the garages for most of the opening 15-minutes, Thursday pacesetters Charles Leclerc and Carlos Sainz Jr were on track early in their Ferraris.

Just past the 10-minute mark, Sainz took over at the top spot with a 1m13.300s – also set on the soft tyres, which the majority of the field ran in the early stages.

Leclerc then deposed him with a 1m12.633s and the pair exchanges laps that kept on lowering the benchmark until Leclerc’s 1m11.658s stayed quickest for a lengthy spell.

That was broken by Verstappen, who worked his tyres up to temperature over several laps and went quickest just before the 25-minute mark with a 1m11.485s.

But the Ferrari’s were not done with their opening runs, as Sainz wrestled back the top spot with a 1m11.452s a few minutes later – and Leclerc looked like he might go faster still before a mistake at the chicane proved to be costly.

After a short mid-session lull, the Ferraris led the majority of the pack back out for another lengthy run on the softs – the final efforts to build towards qualifying.

Leclerc’s preparations for another flying effort were disrupted by a trip down the Ste Devote escape road after carrying too much speed into the right-hander and opting to bail out, while Sainz was able to improve the top spot time to a 1m11.341s a short while later.

Just after Sainz crossed the line – where ahead of him Bottas was also having a moment at the first corner – the session was red-flagged after Latifi crashed at the exit of the second part of the Swimming Pool.

Latifi clipped the wall inside the first apex and as a result was spat wide and over the kerbs at the second apex, which sent him straight into the wall on the outside and broken the right front off his car.

The session restarted after a five-minute delay, which gave the drivers just over 10 minutes to complete their final qualifying simulation efforts.

Verstappen was out earlier than the Mercedes and Ferrari drivers and immediately got close to Sainz’s time on his first flying lap.

As his run continued and the temperature built in his tyres, Verstappen found time shot to the top spot with a 1m11.294s, while Sainz, running just ahead of the Red Bull, did not improve.

Those laps ended up being the frontrunner’s final real efforts, as the session was brought to an end with over two minutes left on the clock after Schumacher’s incident at Casino Square.

The rookie driver lost the rear of his car coming through the right-hander that leads down the bumpy straight to Mirabeau.

Schumacher slid wide and smashed the rear of his Haas against the barrier, casing considerable damage to both rear wheels and his left front.

That meant Verstappen and Sainz finished as the top two, followed by Leclerc, who had still been building up to set a final flying lap when the red flags came out for the second time.

Bottas improved late on to slot into fourth, but Hamilton, who struggled with oversteer throughout FP3 – at one point shooting across the second part of the Swimming Pool’s run-off after correcting a rear slide – unable to do likewise.

He therefore finished behind Sergio Perez and Lando Norris, who nearly ran into the back of Sainz during the early running when the Ferrari cut across his nose on the approach the final corner in what appeared to be an unfortunate botched attempt to get out of the McLaren’s way.

Raikkonen finished eighth for Alfa Romeo , with Pierre Gasly and Sebastian Vettel closing out the top 10.

Latifi’s best time put him P18, ahead of Yuki Tsunoda and Esteban Ocon at the rear of the pack.

Schumacher was left furious with Mazepin after the Russian aggressively chopped across the front of him as they ran to the chequered...

He wants to stay in Moto2

Fernandez stepped up from Moto3 to Moto2 in 2021 with KTM Ajo Motorsport and has won two races already this season, putting...