An Arsenal star looks set to defy the club and snub a new contract offer, news that will alert both West Ham and Brighton this summer.

England Under-21 captain Eddie Nketiah has been strongly tipped to move on this summer, with a move back to former loan outfit Leeds once mooted, while the Hammers and Seagulls are also an option. However, it would appear that Arsenal have made a U-turn over the frontman’s future and now want to keep him.

The Atheltic states that the Gunners want to hand the player a new contract, despite the fact he had a disappointing 2020-21 campaign.

But the report adds that Nketiah is unlikely to sign up, as he has concerns over his first-team chances.

The forward scored just two Premier League goals in six starts last season and is one of a number of Arsenal players tipped to move on.

Pierre-Emerick Aubameyang, Folarin Balogun and Gabriel Martinelli are all on long-term contracts. That could lead to the Gunners cashing in on the likes of Nketiah and Alexandre Lacazette to fund new signings.

The young forward showed flashes of his ability at Elland Road during his five-month temporary stint. However, it’s not thought that Marcelo Bielsa will pursue a permanent deal for the player.

As for West Ham, David Moyes is very much in the market for a new No.9. The Hammers are yet to replace Sebastien Haller since his January switch to Ajax.

Brighton are also contenders, with Graham Potter wanting to improve his goalscoring options at The Amex.

The report does not mention a fee for the 21-year-old, although transfermarkt currently rates the player at around £13.5m.

Meanwhile, Arsenal technical director Edu could launch a bid to bring a La Liga striker operating at one goal in two to the Emirates, per a report.

Arsenal are on the hunt for reinforcements to provide Mikel Arteta with the ammunition to launch a top four assault. The Gunners will be aided by the absence of European football next season, though the biggest boost would come from the additions in the market.

The attacking areas seem to be where the club have thus far been linked with doing their business.

Arsenal were heavily linked with a swoop for Norwich playmaker Emiliano Buendia. But despite the difference in prestige, Aston Villa were able to beat out the Gunners to the Argentine’s signature.

Martin Odegaard is understood to be high on Arteta’s wishlist to shore up the No. 10 position. But the change of manager at Real Madrid could see the Norwegian given a second chance at the Bernabeu.

Positive news has been in short supply so far, but the latest report from the Athletic has put a sparkle in Arsenal fans’ eyes.

They (via TBR Football) reveal that Arsenal are ‘eyeing Real Sociedad forward Alexander Isak as a possible transfer target.’

The Sweden international, 21, took his game to new heights last season by bagging 17 goals in 34 La Liga outings. What makes that return all the more impressive is that not a single strike came via the penalty spot. 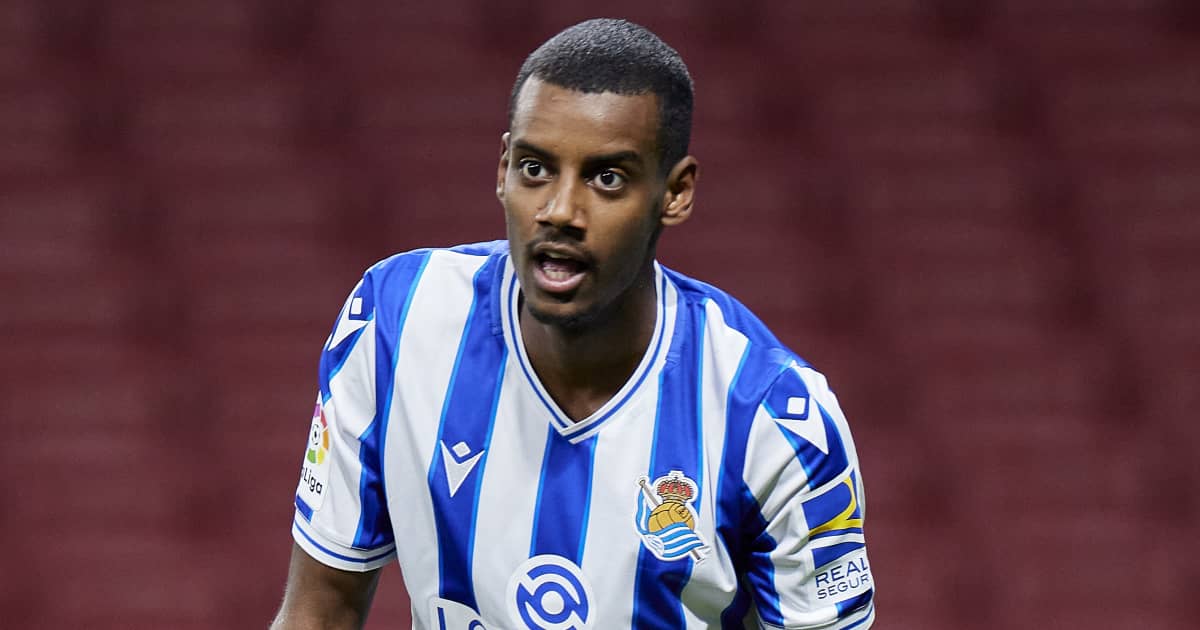 Isak is projected to play a big role for Sweden at Euro 2020 in Zlatan Ibrahimovic’s injury absence. That will draw the attentions of many, but Arsenal chief Edu is already a keen admirer.

Edu is described as rating the striker ‘very highly’. Accordingly, he would reportedly be a firm favourite to sign if the club can first offload a striker.

A release clause of €70million (£60.2million) is said to be present in the Sociedad hitman’s contract.

Standing at 6ft 4in tall, possessing rapid pace and already boasting a keen eye for goal, Isak is deemed by the article to be a ‘natural fit’ for the Premier League.