The White House reduced the size of Joe Biden’s proposed infrastructure package from $2.25tn to $1.7tn on Friday, but Republicans’ swift rejection of the counterproposal cast doubt on the possibility of a bipartisan agreement.

But Republicans quickly rebuffed the offer, saying there “continue to be vast differences between the White House and Senate Republicans when it comes to the definition of infrastructure, the magnitude of proposed spending, and how to pay for it”.

Biden, who spent decades in the US Senate before serving as Barack Obama’s vice-president and campaigned on a record of reaching across the political aisle, has repeatedly said he wants bipartisan support for his ambitious infrastructure agenda.

Yet Friday’s developments made it seem increasingly unlikely that Biden and the Democrats will be able to do a deal with Republicans, who last month proposed a much smaller $568bn plan and have dismissed Democratic proposals to raise taxes on corporations and the wealthiest Americans to foot the bill.

A spokesperson for Shelley Moore Capito, the Republican senator from West Virginia who has led GOP lawmakers in negotiations with the White House, said the administration’s latest counter-offer was “well above the range of what can pass Congress with bipartisan support”.

“The groups seem further apart after two meetings with White House staff than they were after one meeting with President Biden,” the spokesperson said, adding that Senate Republicans would “further review the details” in the latest counter-offer and “continue to engage in conversations with the administration”.

A White House memo obtained by the FT detailed the administration’s revisions to its initial $2.25tn proposal, including removing investment in manufacturing and research & development, as well as reducing the proposed funding of broadband investments to $65bn.

The president also reduced his proposal for extra funding for roads, bridges and major infrastructure projects from $159bn to $120bn, according to the memo. Republicans had initially proposed an extra $48bn for such initiatives. 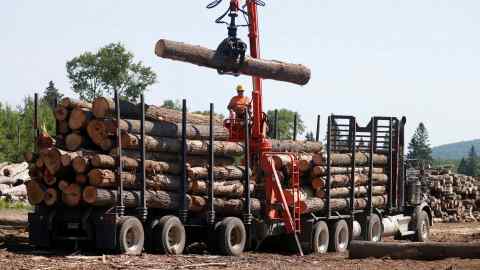 “This proposal exhibits a willingness to come down in size, giving on some areas that are important to the president — otherwise they would not have been in the proposal — while also staying firm in areas that are most vital to rebuilding our infrastructure and industries of the future,” Psaki told reporters at the White House.

Democrats and Republicans have been divided for weeks over how to pay for Biden’s sweeping spending proposals.

The White House memo said the president “fundamentally disagrees with the approach of increasing the burden on working people through increased gas taxes and user fees”, and that Biden “intends to honour” his “commitment” not to raise taxes on Americans earning less than $400,000 per year.

“Major corporations are among the largest users of transportation infrastructure in our country,” the memo said. “They are also paying the lowest level of taxes as a share of our economy since the 1930s. Our approach should ensure that corporations are paying their fair share.”

“This will slow the economy down to a crawl, and I think our chances of stopping it . . . are pretty good,” he told Fox News. “They may be able to pull it off, but I think it is going to be really hard, and we are going to fight them the whole way.”

The primetime English-language news show by China’s state broadcaster was about to go on air when a copy editor in Beijing was handed...

‘It was war’: party-goer loses hand amid clashes with French police at illegal rave | France