Will a Major Hurricane Hit the Miami Broward WPB Area This Year? I Hope Not… But it Could They Are Overdue for the EYE of a Hurricane.

Will a Major Hurricane Hit the Miami Broward WPB Area This Year? I Hope Not… But it Could They Are Overdue for the EYE of a Hurricane. 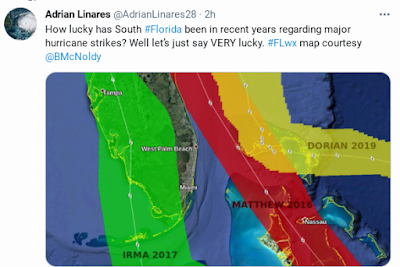 This is a map made by Brian McNoldy

If you live in South Florida….

…or anywhere during the Hurricane Season.

While things are quiet and not much is going on I’m trying to put links to sites to use and people to follow on social media who are excellent sources of reliable information. In his case, he is prone to unique, original ways of presenting valuable material that helps you understand better some of the finer points of a particular situation be it a current set up or historical information.   If you were playing a paint online game you’d be trying to figure out what color line to draw across the Miami to West Palm Beach metropolitan area and that’s concerning as that area is overdue for such a hurricane.  Many in Miami and the Ft. Lauderdale area would argue that and point to all the trees down and their roof damage from Hurricane Irma in 2017 and that’s because they fail to remember they did not get the EYE of Irma nor the brunt of it’s power, they had all that damage from a brush with Irma that made landfall in the Florida Keys but due to it’s immense size delivered a wicked punch to North Miami Beach, Walnut Creek and other places far to the North and East of where Irma made landfall. A similar smaller storm would not have impacted the Miami area if it moved quickly through Marathon in the Florida Keys so remember with hurricanes not only strength but size matters! 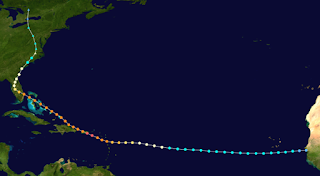 Also what is worth remembering is that the general Miami area was in the Cone often for both Irma and Dorian and Matthew scared Miamians greatly even if the cone showed it could stay offshore. The NHC did a good job with those hurricanes and they did veer away from a visit to Miami. This is a very DANGEROUS set up as what happens after these sort of brushes with danger is that people begin to believe Miami is safe and all the hurricanes will veer way from the coast as Dorian and Matthew did but many such as the 1926 and 1928 Hurricanes did not, nor did Betsy, Katrina nor Andrew that made a due West beeline for Miami and never took the road that David did in 1979 when it took aim at Miami and then veered up the coast. Why is this important? I knew many people in Miami during Andrew that refused to believe that Andrew would not do what David did and it would go somewhere else. 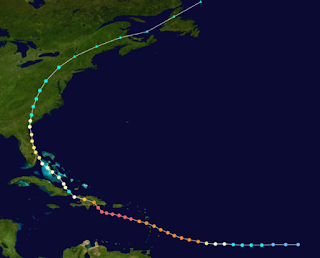 Miami is a city that always has new people who have moved into the area and never experienced a Hurricane. Old times tell them about Donna and Betsy and Andrew and they think they will be fine, they will not be if a Major Hurricane makes landfall at Hollywood Beach or Aventura just North of Miami but all part of the same metropolitan area demographically and otherwise. Also we have a huge transitory population of people who are they college students or employed in the HUGE hotels and restaurant business that makes up a giant slice of the Miami economy! 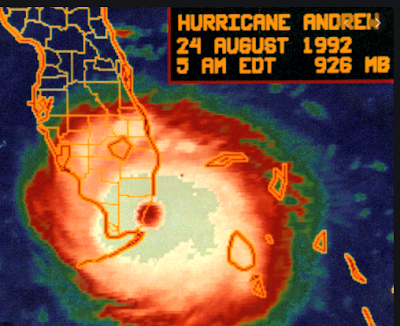 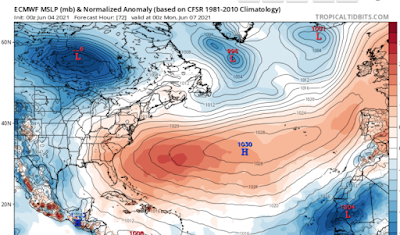 A nice wave over Africa…

There’s online chatter on something in 10 days or so…

.. maybe down in the Caribbean headed North.

Or by the Yucatan…. or out in the Atlantic.

But nothing expected to form for the next 5 days.

Use this time wisely for Hurricane Preparation.

This IS Hurricane Season.

… up from the Carib towards Florida.

Currently the huge High Pressure is in place, so use this time wisely. As I said in a previous blog, my friend Sharon was sure we would get a hurricane in the very dead summer of 1992 when the first named storm didn’t show up until Mid August named Andrew. Sharon rinsed out bottles of Publix Soda and filled them up with tap water and stored them away and bought inexpensive bottled water when on sale. When Andrew changed course for Miami, as she thought it would do as she didn’t trust that weak cold front in August, she had close to 80 bottles of water stored in her garage to use for drinking or washing. After Hurricane Andrew on Miami Beach far from the eye but getting strong impressive winds, we had no water for a long time and we had no electric even longer and we had no cable to watch TWC until late November.

Be like Sharon, don’t be that guy at Publix buying perishable deli and ice cream because you are sure this is just a big scare and the next big Major Hurricane aiming for Miami will turn away and crash into South Carolina as Matthew did……  Prepare now! Buy canned food, water, non-perishable food and stock up on your medications. Don’t be that person left at Publix who went too late and is standing at the empty aisles staring at cans of oysters and sardines.

Thanks for your patience while I was on vacation in Miami visiting my family and attending a wedding for Sharon’s son. It was a long road trip after a few days in Charlotte for business before the trip to Miami, a stop on the way back in Savannah and I’m finally back in Raleigh. I learned years back from friends of mine who worked at the NHC that the best time to usually take a vacation is actually early June, before the season ramps up 🙂 Learn from the best …

I should be updating every day from now on so follow me as we cruise into the height of the Hurricane Season when SAL begins to let go of his dusty hold on the Atlantic and the Huge High Pressure suddenly fades away and yellow circles pop up South of Cuba or off the coast of Florida in the Bahamas and as always near the Yucatan.

Ps. A dirty little secret is that Miami Beach was trashed by Hurricane Andrew, all the street signs, store awnings and often AC units on condos crashed to the ground below. Massive Ficus Trees were uprooted with most of the yard, pine trees on Pine Tree Drive fell onto homes. My neighbors roof on Flamingo Drive took flight and landed in tact in the back yard of a house on Pine Tree Drive near 41st Street. Bits and pieces of plastic from the Dry Cleaners, the Used Bookstore and Epicure then on Arthur Godfrey Road landed all across my parent’s house on 37th and Royal Palm Avenue. My neighbor next door, a photographer who was working for Newsweek got back from covering Homestead and asked what happened on Miami Beach as it wasn’t mentioned in the news. As Andrew approached Miami, just before it made that itsy bitsy dip to the South that saved most of downtown Miami… it’s approaching wind and wild surf took aim on Miami Beach. I’m grateful that despite all that wild damage (we had no Traffic Lights on 41st Street for half a year, they all were gone with the wind) we were spared the horrific damage the eye did in Homestead. So while thinking on all the debris you had from Irma remember it made landfall near Big Pine Key NOT in Miami nor Hollywood Florida! Prepare now! Use this “quiet” time wisely!!

All the damage in the old blog below was from Miami Beach. They hired people fast to clean it up and laid low and tried to stay out of the news and to get back up and running for the 1992/93 Tourist Season. They were not as lucky in 1926… but that’s another blog.

Yes most buildings were “fine” but everything else went whoosh with the wind… and that beautiful Polynesian style roof some friend of mine had… small square houses do best in a hurricane in Florida… no power for weeks, no cable for months… debris sat until late October after the Andrew Hurricane. 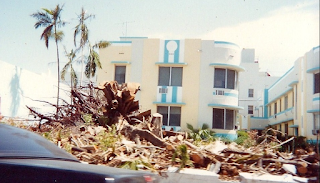 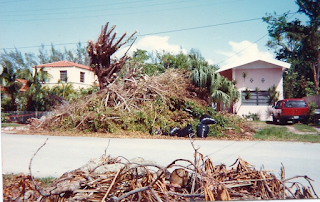 Well, my friendly White Rabbits in Wonderland! I'm late, I'm late, for a very important date. No time to say hello! But I...

Claudette Does the Carolinas………….. Waves Off of Africa Looking Good

The rain is falling as I type this, steady, heavy but not real wind as of yet. Just heavy rain on Father's Day...